Over a dozen different rootstocks have been observed in various orchard situations with local growers in Butte County over the past twenty two years. The complete results of these trials can be found in past Annual Rootstock Project Reports to the Almond Board of California. The following article summarizes what I believe are the most useful results and conclusions.

I planted nine trees of ‘Nonpareil’ on ‘Krymsk 86’ in spring 2010 spread between three different oak root fungus spots in commercial orchards. The growth on ‘Krymsk 86’ was good and seemed similar to growth on ‘Lovell’. None of these 9 trees were killed by the fungus although a ‘Lovell’ rooted replant of similar age died in one of the fungus spots. ‘Krymsk 86’ is not immune but appears relatively resistant or tolerant. So far, I’ve only seen one tree on this rootstock killed by oak root fungus in a commercial orchard. As you know, ‘Krymsk 86’ has since become a dominant rootstock for new almond orchards in the Sacramento Valley.

A rootstock trial was planted bare root in March 2010 at 24×16 feet on Farwell Loam soil in Durham following the removal of a previous ‘Lovell’ peach rooted orchard containing some Marianna 2624 plum rooted replants. The grower’s current orchard is on ‘Krymsk 86’ rootstock and is solid set irrigated and managed for those trees.  ‘Nonpareil’ trees on ‘Rootpac-R’, ‘Atlas’, ‘Krymsk 86’, and ‘Empyrean 1’ rootstocks are compared to trees on the standard rootstocks ‘Nickels’ and ‘Lovell’. Four of the six rootstocks established well in the first growing season with no tree losses. ‘Atlas’ suffered 10% mortality at planting and ‘Nickels’ lost 16% of the new trees. This trial is nearly complete and much has been learned.

Nutrient levels. Certain rootstocks forage better for some mineral nutrients and are better at excluding other elements. This knowledge will help select rootstocks with the best fit for orchards where there are site challenges. Rootstocks defend against specific challenges and some stocks are more tolerant of high pH, salt, and alkali than others.

Hullsplit timing.  The approximate order of ‘Nonpareil’ hullsplit as influenced by rootstock in both 2018 and 2019 from earliest to latest was ‘Rootpac-R’, ‘Lovell’, ‘Atlas’ and ‘Krymsk 86’, and finally ‘Empyrean1’ and ‘Nickels’. While the least vigorous rootstock ‘Rootpac-R’ was ready to shake by the end of July 2019, the much more vigorous ‘Empyrean1’ and ‘Nickels’ rooted trees weren’t ready to shake until roughly August 16th, over two weeks later. Different orchards with the same variety will vary in hullsplit timing and harvest maturity depending on rootstock. ‘Krymsk 86’ was ready to shake in the 2nd week of August possibly avoiding the 3rd generation of NOW egg laying in some years.

Tree size. After ten growing seasons, trees on ‘Empyrean 1’, a peach hybrid, are largest in circumference followed by trees on the ‘Nickels’ peach/almond hybrid. Trees growing on ‘Atlas’, an interspecific hybrid (peach/almond x apricot/plum), ‘Lovell’ peach, and the peach/plum hybrid, ‘Krymsk 86’ are similar in trunk circumference. Trees on ‘Rootpac-R’, a plum/almond hybrid, are the smallest in circumference and are the weakest growing trees in the trial (Figure 1). Once trees came into bearing the most vigorous rootstocks continued to increase tree size while tree size on less vigorous rootstocks began to fall behind (Fig.1). Canopy width (Table 1) gives an indication of how well the trees have filled their space across the 24 foot wide orchard middle. 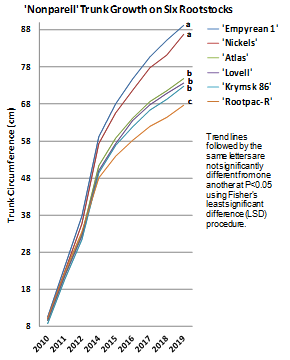 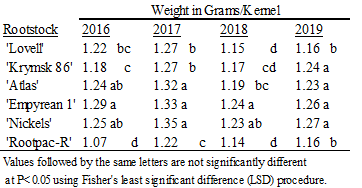 The intermediate yield noted on ‘Lovell’ and on ‘Krymsk 86’ rooted trees appears to be related to tree size and nut set since both trees and kernels on these rootstocks are similar in size. Although similar in trunk circumference to trees on both ‘Lovell’ and ‘Krymsk 86’, the larger canopy of trees on the ‘Atlas’ rootstock often produced both larger nut size and a significantly greater yield (Fig.1 and Tables 2 & 3).  Accumulated ‘Nonpareil’ yield through the 10th leaf is greatest on the ‘Nickels’ and ‘Empyrean 1’ rootstocks (Table 3) as these are the largest trees in the trial.

Summary.  Although rootstock behavior and characteristics can be documented in rootstock trials it should be recognized that results are always going to be somewhat site specific. For instance, we know from other work that the ‘Krymsk 86’ rootstock is very susceptible to root knot nematodes.  If your site had this limiting factor ‘Krymsk 86’ would not be the rootstock for you. Tree canopy size is the greatest factor in yield as the accumulated total yield of trees on these six rootstocks closely follows the same pattern as canopy width shown in table 1. Yield of the smaller trees on ‘Lovell’ and ‘Krymsk 86’ could be improved if the orchard tree spacing was ideal for each rootstock. This work shows that it’s critical to get the spacing right when planting if optimum yields are to be produced.

Beyond yield, when choosing a rootstock, attention to other limiting factors such as salinity, drought tolerance, and drainage issues must be considered. If excess chloride is a limiting factor on your site, the ‘Krymsk 86’ or ‘Lovell’ rootstocks would not be a good choice for you. ‘Atlas’, ‘Empyrean’, and ‘Nickels’ are better at limiting the uptake of harmful chloride salt. Other essential nutrients such as potassium are taken up more effectively by ‘Krymsk 86’, ‘Atlas’, and ‘Rootpac-R’ while ‘Empyrean 1’ and ‘Lovell’ tend to pick up less potassium.

Overall, for new plantings, rootstocks should be selected to help overcome the greatest challenges that your particular orchard site faces.