Beginning in late June, several PCAs and growers reported trees in almond orchards in the Sacramento Valley with symptoms like those of almond leaf scorch (ALS), a disease caused by the bacterium Xylella fastidiosa. This is the same bacteria that causes Pierce’s disease in grapes. In addition, ALS symptoms appeared far more widespread and severe at the Regional Almond Variety Trial at the California State University, Chico Farm where the disease was first confirmed in 2018 after appearing on only a handful of trees. UC farm advisors working with UC and USDA plant pathologists have begun a survey to confirm disease presence and improve understanding of the disease in the Sacramento Valley. 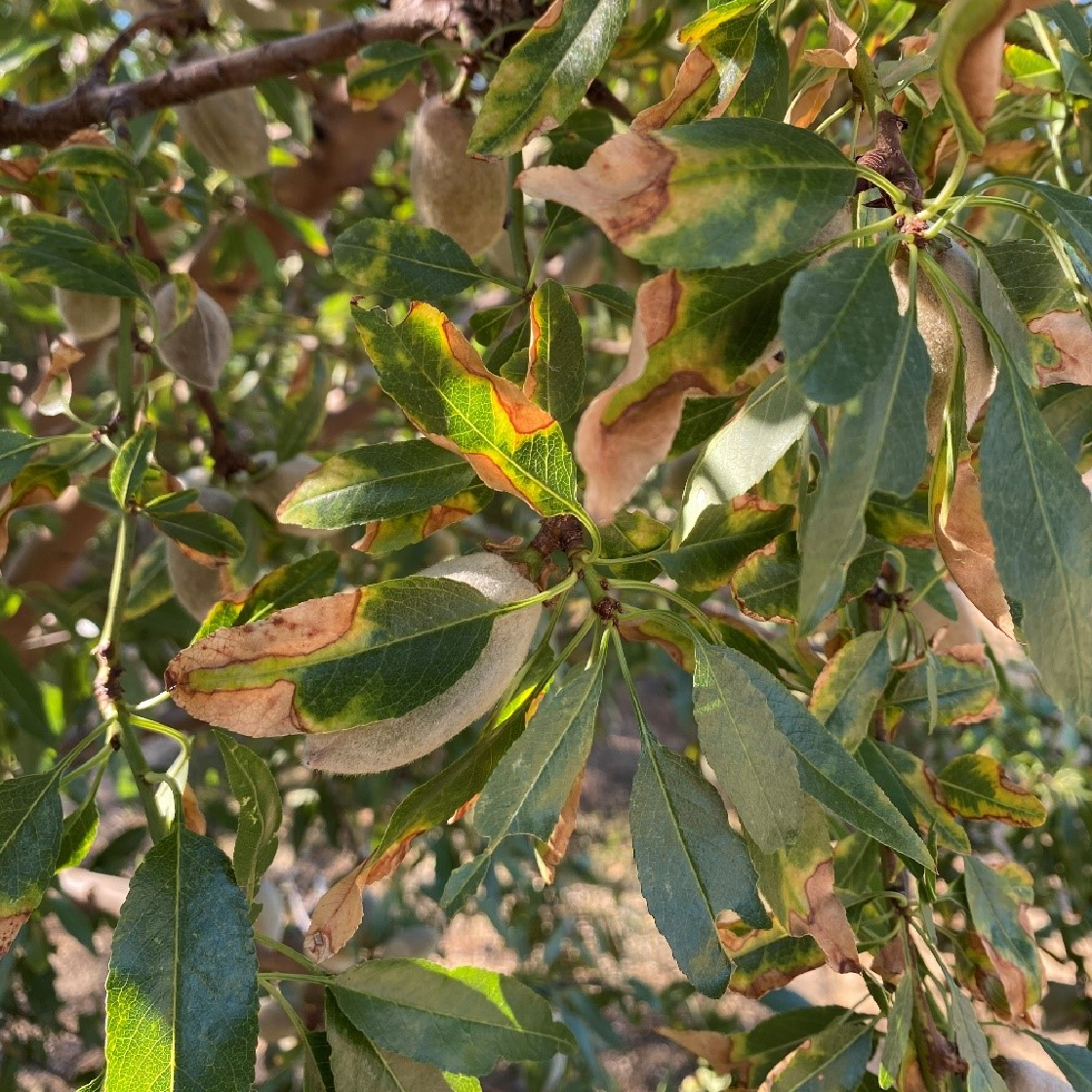 The disease has been present in California for over 70 years, and in recent years has only been periodically a widespread issue. However, the increased prevalence this year brings new concerns. Firstly, warmer summer and winter temperatures can increase disease prevalence, and there is a concern that this could move from a minor issue for the industry to a potentially serious problem as the climate changes. In addition, USDA researchers previously showed that rootstock susceptibility to the disease varies. They showed that Nemaguard had resistance to infection, isolating ALS infections to the scion and eventually leading to disease remission. Nemaguard although widely planted in the San Joaquin is not widely planted or adapted for the Sacramento Valley. Since that work, the Sacramento Valley has become heavily reliant on Krysmk 86, which is untested as a Xylella fastidiosa host. Finally, different types of Xylella fastidiosa have very different biology. There is some data showing one type (multiplex subspecies) in the Sacramento Valley and another type (fastidiosa subspecies) isolated in the San Joaquin Valley. Due to differences in strain, it is possible that varietal selection and breeding efforts, as well as other disease management measures will have to be distinct in the Sacramento Valley.

Symptoms
The bacteria live in the xylem, the water transporting structures in plants, and reduce the flow of water to leaves. Leaf tissue dies when xylem plugging results in insufficient water arriving at the leaf margins. Almond leaf scorch symptoms first appear on individual leaves in early June to mid-July. The leaf tips or margins initially turn light green or yellow (chlorotic), with brown scorching occurring with the onset of hot weather (figure 1). By late July, symptoms are fully developed and are most noticeable (figure 2). 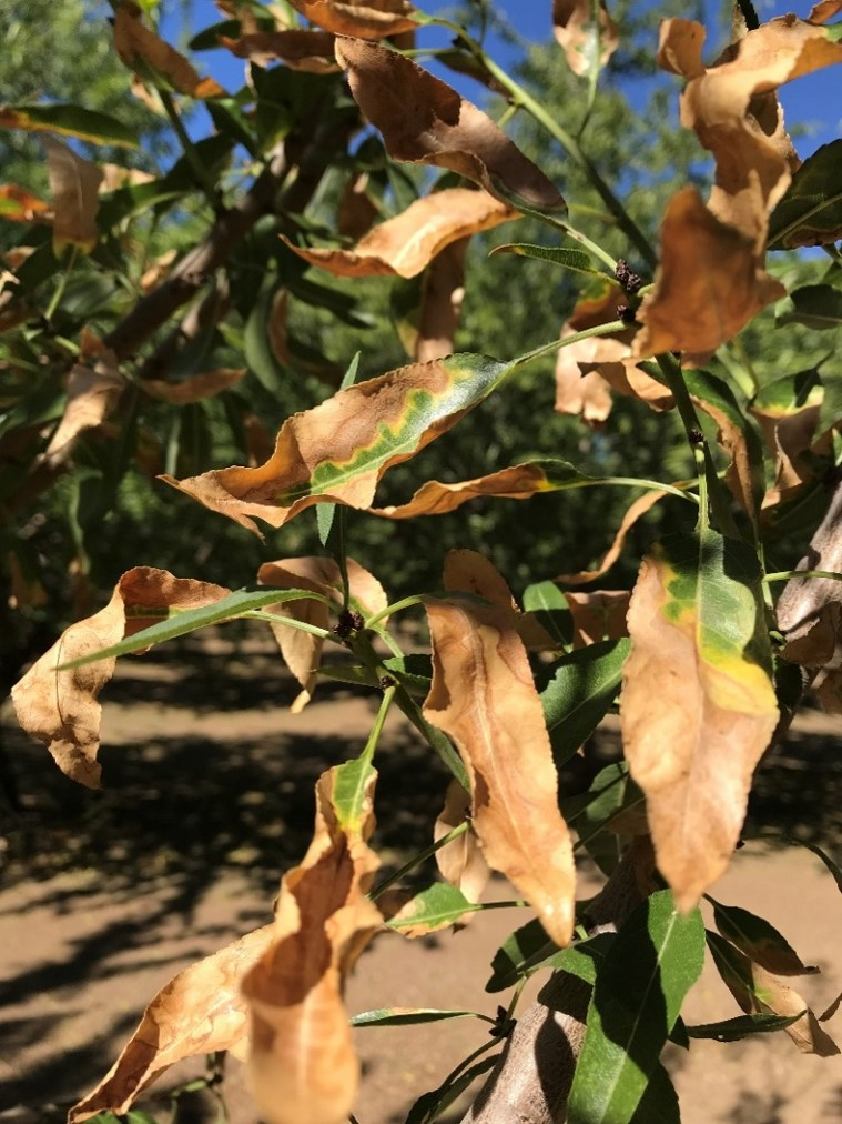 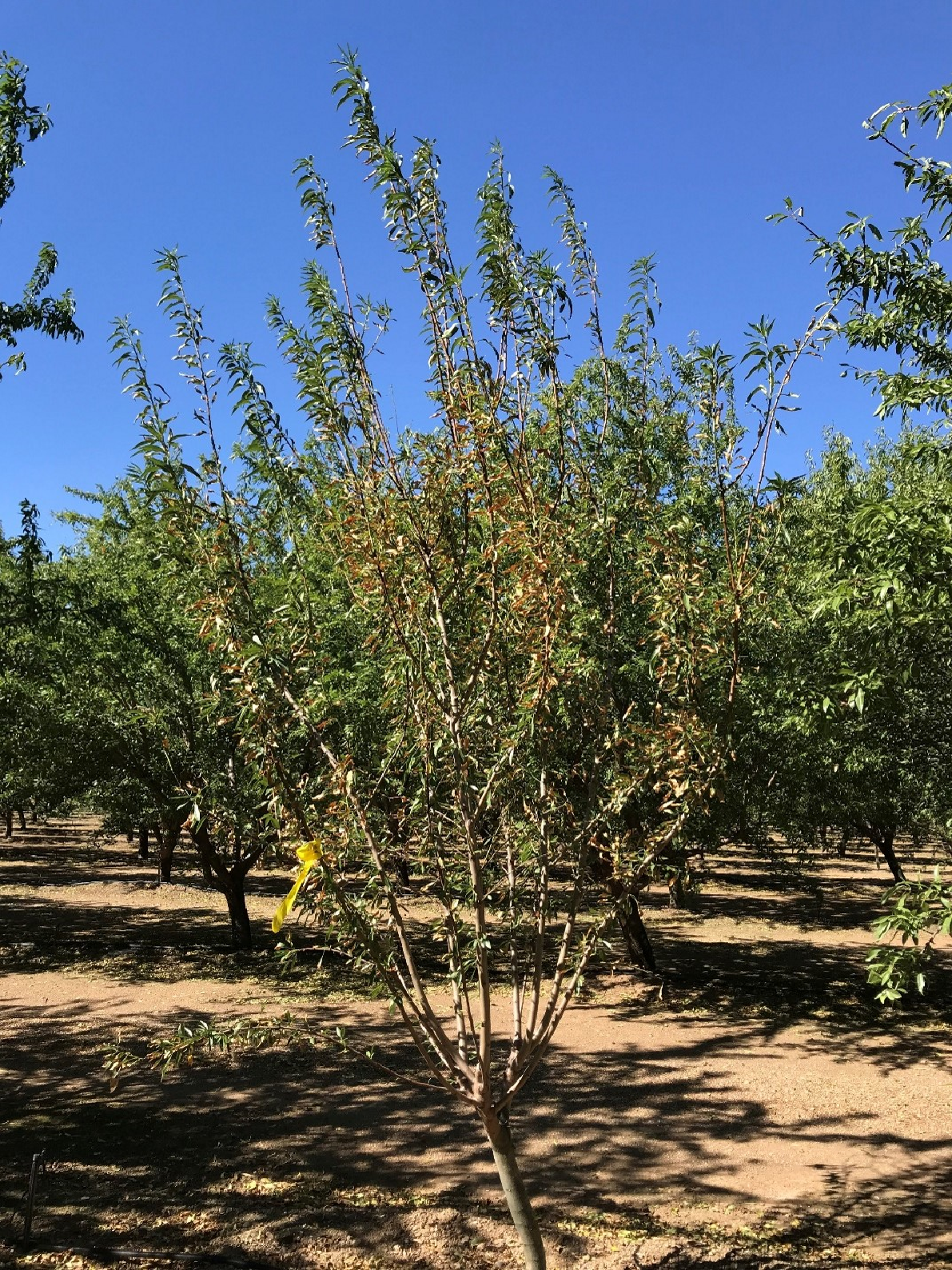 Figure 3. Severe scorching throughout the canopy of a Wood Colony replant in 2019.

Scorch symptoms may first appear in a single branch, scaffold, or portion of the tree, but can subsequently spread to affect the entire tree. The rate of symptom spread from when first visible to infecting the entire tree can occur slowly over several years, or relatively fast, infecting the entire tree from one season to the next. It may be easily overlooked when only a few leaves on one branch are affected. Almond leaf scorch is also known as Golden Death because of the striking yellow and brown color of a fully infected tree’s canopy (figure 3). 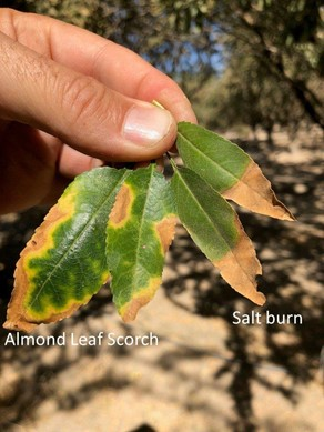 If you suspect that a tree may be infected, first test its leaf tissue for excess toxic salts, particularly chloride and sodium. Salt injury, particularly chloride burn, may be mistaken for almond leaf scorch.  Sometimes the two are indistinguishable. With salt damage, there is usually just healthy, green tissue and dead, brown tissue without the yellow margin between the healthy and dead tissue. Salt injury may occur at any time but often worsens as the growing season progresses (figure 4). Ordinarily it is a result of excess chloride and/or sodium in soil or water. Unlike almond leaf scorch, salt injury affects numerous trees in a concentrated area rather than individual trees widely scattered throughout an orchard. Salt damage also usually effects the entire tree, not individual branches as ALS can.

If leaf sodium and chloride levels are normal you may wish to have the tree tested for leaf scorch. The best time to test for almond leaf scorch is July through September.

The same testing practices and labs that can detect Xylella fastidiosa in grapes can be used for testing almond leaves for ALS. The cost per sample runs from approximately $150-400 depending on the lab and the number of tests run.

Foliar ALS symptom development patterns over time further complicate disease identification. The classic understanding of the disease is that within a few years affected trees lose vigor, become unproductive, and may eventually die. This assumes that ALS infects more of the tree with each succeeding year. However, a group of USDA and UC researchers have contrary observations, showing that infected trees do not precipitously decline, but instead have a relatively stable infection that produces a relatively consistent yield decline each year. Thus, do not rule out ALS as a cause of symptoms just because tree decline is not precipitous or dramatic.

It is important to identify and mark affected trees while the scorched areas of the tree canopy contrast clearly with healthy green leaves. Once harvest begins, mites, dust, and drought stress combined with tree shaking often make signs of almond leaf scorch more difficult to detect.

Variety susceptibility
Older reporting noted that varieties that appear more susceptible in the field include Peerless, Sonora, Winters, Livingston, and Wood Colony. In 2020, ALS symptoms in Monterey were observed in the Northern Sacramento Valley and are being tested for the disease. Nonpareil is also susceptible and can be significantly affected. The disease is rare in Carmel and Butte and is seen less often in other varieties.

Pathogen and vectors
ALS presents a potentially serious threat to California almond orchards since it is spread by sharpshooter leafhoppers or spittlebugs which feed in the water conducting xylem vessels of the trees. These insects carry the pathogen from plant to plant. Common annual weeds in the orchard can also be sources of infection. At this time, there is little evidence of tree-to-tree disease spread. Instead, sharpshooters feeding on infected trees infect annual weeds and sharpshooters feeding on the infected annual weeds can infect additional trees in the orchard. Irrigated pasture, weedy grasses, alfalfa, and permanent cover crops are the most common habitat for sharpshooters in almond growing regions of California.

The grass sharpshooter or green sharpshooter (Draeculacephala minerva), is the most common vector of this disease in Sacramento Valley almond orchards according to a 2011 survey by Cooperative Extension specialist Kent Daane and others. Blue‐green sharpshooter (Graphocephala atropunctata), and glassy-winged sharpshooter (Homalodisca coagulata) can also be vectors. The small, green potato leafhopper (Empoasca sp.), prune leafhopper (Edwardsiana prunicola), and the white apple leaf hopper (Typhlocyba pomaria) that commonly feed on almond leaves are not vectors of this disease.

What to do
No chemical or nutritional treatments control almond leaf scorch. In addition, no research or practical experience suggests that disease occurrence is reduced by controlling the vectors with insecticides.

In young orchards less than 10 years old, early identification and removal of diseased trees may minimize the problem and reduce further tree losses. If your orchard is 16-20 years old, you may want to simply live with some infected trees until the orchard is removed and replaced. Orchards between 10 and 16 years old are the difficult call – do you remove the infected trees or live with the problem? The answer to this question may depend on what is around the infected block. If infected trees jeopardize a newly planted nearby orchard, then, removing the trees might be the best course.

Pruning out early infections in a single infected scaffold can be successful. However, cuts must be made at least 5 feet below the lowest symptomatic leaves to have any chance to save the rest of the tree. Be sure to mark trees if you attempt to prune out the disease and re-inspect the tree the following year.

One Response to Almond Leaf Scorch