Farm Advisors and PCAs have fielded calls concerning Monterey trees on Krymsk 86 or Rootpac-R showing unique foliar symptoms – yellowing, rolling leaves with marginal necrosis and poor growth. Occasionally Nonpareil or Butte trees may be affected, but based on planting preferences and symptoms, Monterey generates the most concern. Most of the trees show these symptoms in the second leaf, but in some situations, first and third leaf trees are also affected. Trees showing the symptoms may appear singly or in random groups down the tree row. 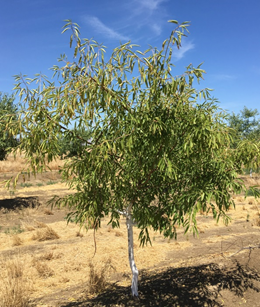 Union Mild Etch symptoms include pitting at the graft union of affected trees that limits movement of sugars from the canopy to the roots, weakening the roots and predisposing small feeder roots to attack by weak fungal pathogens under warm, wet soil conditions.  Research on Union Mild Etch found symptoms occurred more often when soils were too wet either due to excessive rainfall or over-irrigation. Trees may look water stressed, but that does not mean more irrigation will help the problem. While there is no etching reported at the bud union on Monterey on K86 or Rootpac-R, the symptoms and recommended treatment have been the same: don’t over irrigate, limit fertilizer, and let the trees recover naturally. While the most seriously affected trees may not recover – a few die – the majority appear to recover. 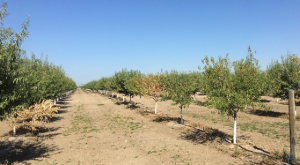 A row on Monterey on Krymsk 86 rootstock on July 14th, 2017. Trees are small and pale in color. Photo: F. Niederholzer. 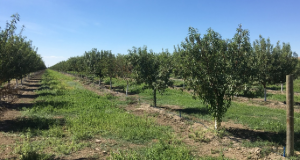 The same row of Monterey on K86 rootstock on September 19, 2017. While the third tree in the row died, the remainder are healthier in September compared to July. Photo: F. Niederholzer.

For years, Butte and Monterey were listed in tables as partially incompatible on Marianna 2624 plum rootstock. Research by Jerry Uyemoto (USDA, retired) and Joe Connell (UCCE Butte Co, emeritus) conducted over 15 years, found the problem was more related to excess soil moisture than genetic incompatibility. When soils were too wet during the warmer part of the growing season, weak pathogens (Fusarium, Cylindrocarpon) in the soil would attack the fine feeder roots usually without harming the larger more permanent root structure. The problem occurred when wet winter/late spring rain kept the soil too wet or when growers over-irrigated young trees. These researchers produced the problem (yellowing, curled leaves with reduced growth) by over-irrigating previously healthy Butte/M2624. The problem is not a nitrogen deficiency; and, since the larger more permanent roots were healthy, when excessive soil moisture was corrected the trees would normally recover. By the time the orchard is 4-5 years old the problem seldom occurs since growers are less likely to over-irrigate at that age.

Bottom-line, the yellowing of Monterey on K86 or Rootpac R looks to be related to excess soil moisture, not incompatibility. The good news is that water can be managed, incompatibility can’t be. True graft incompatibility usually manifests as gumming at the graft union, weak growth of the scion, and suckering from the rootstock.