The following article is reprinted from the April, 2022 issue of The Advisor, published by the California Association of Pest Control Advisors (CAPCA).

Protecting California’s waterways from pesticides is the joint responsibility of all Californians. These protections need to be implemented within urban as well as agricultural environments because typical watersheds are influenced by hundreds, if not thousands, of individual point sources that are associated with homes, other residential buildings, farms and right-of-ways. While it is true that one individual point source can lead to contamination of a waterway, it is often the cumulative effects of numerous point sources that leads to exceedances of pesticides.

During the past two decades there has been a concerted effort to keep pesticides out of waterways in the Sacramento Valley. For many years the focus was on organophosphates. Significant amounts of research on reduced-risk pesticides chemistries, alternatives to dormant spray applications in orchards, improved application technologies, and the regulatory cancellation of many urban and agricultural organophosphate products have led to significant reductions in use. Between 2000 and 2019 there has been a steady decline in organophosphate use by farmers, ultimately leading to a 62% overall reduction in acres treated (Fig. 1) and 71% reduction in pounds applied (Fig. 2). When pesticide use data for 2020 and 2021 are released, it is anticipated that there will be further reductions due to the discontinued use of chlorpyrifos and other changes in grower practices.

As farmers have reduced their reliance on organophosphate insecticides for pest control, there has been a shift to other control tactics. This includes increased reliance on biological control, the adoption of innovative pest management techniques like mating disruption, use of resistant plant varieties, and shifts to a wide range of alternate pesticide chemistries. Most challenging for the topic of watersheds has been a shift towards increased use of pyrethroids (Fig. 1, 2). Similar to organophosphates, pyrethroids are broad-spectrum contact insecticides that control a wide range of agricultural pests.

Unfortunately, as the levels of organophosphate detections in waterways have gone down, the levels of pyrethroid detections have gone up. In general, the amounts found are low and within levels considered safe for aquatic life. Nevertheless, cases of exceedances do occur, and these cases need to be eliminated.

Between 2015 to 2019, Pesticide Use Reports from the California Department of Pesticide Regulation show that approximately 65,000 pounds of pyrethroid active ingredients were applied annually to 815,000 acres of farmland representing 104 different agricultural commodities in the Sacramento Valley. Approximately 80% of all usage was within four commodities: almonds, walnuts, rice, and processing tomatoes (Fig. 3). The overall piece of the pie that each of these commodities represents is due, in large part, to the acreages planted relative to other crops, and not necessarily due to high use on a per-acre basis. In almonds, for example, comparisons of acreages treated and actual acres show that the average almond orchard is treated with a pyrethroid once every two years.

Using almonds as a case study, pyrethroids are typically used during one of three treatment windows routinely referred to as dormant sprays (January), ‘May’ sprays (mostly in April and May), and hull split sprays (July and August) (Fig. 4).

Applications of pyrethroids during the dormant season are usually made for peach twig borer. This pest was historically considered one of the most significant in the region due to the damage that it caused by directly feeding on almond kernels. That is no longer the case. As almond growers in the region have switched from flood-based to precision-based irrigation systems, increases in moisture uniformity during the period of shell expansion have led to a stronger shell seal. As a result, peach twig borer larvae are usually found feeding on the inside of the hull, but outside of the shell where feeding is of no concern.

Additionally, reductions in organophosphate use over the past two decades have increased levels of biological control in almond orchards. For peach twig borer this includes multiple species of parasitoids and field ants. In particular, the native gray ant is known for plucking peach twig borer larvae from their overwintering site (called a hibernacula) to eat them. Faced with decreased issues from this pest, almond growers have already demonstrated significant reductions in dormant insecticide sprays, and in cases where peach twig borer treatments are still needed, most growers have shifted to the use of the microbial product Bacillus thuringiensis during bloom, or other reduced-risk larvicides in April or May according to monitoring and degree-day model calculations.

‘May’ sprays are the second timing window where pyrethroids are sometimes used in almonds. This timing can be for worm pests, such as peach twig borer or navel orangeworm, but is often used to control large bugs, such as leaffooted bug and stink bugs, that can cause significant damage to almond kernels by using their proboscis to probe into the nutmeat. This causes shriveled kernels or nut abortion while the meat is still developing or can leave the kernel misshapen or blemished (dark stain/brown spot) if feeding occurs after it has already formed. Unfortunately, this is a case where there are few alternatives to pyrethroids. Reliable cultural controls for this pest don’t exist, biological control is limited to egg parasitoids that are often in low abundance, and trials using reduced-risk insecticides at best have found products that can control a percentage of adults on contact, but that do not provide any residual control against additional bugs that continue migrating into the orchard. Fortunately, on an annual basis the need for stink and leaffooted bug treatments is the exception to the rule, and growers can make treatment decisions on an as-needed basis, while taking care that any pyrethroids applied stay on site and do not drift into waterways.

Hull split is the third period of the year when pyrethroids are used in almonds. Some of these treatments may be for stink bugs, but the majority are for navel orangeworm. This pest is the most significant pest of both almonds and pistachios at a statewide level, and it also attacks walnuts. Larvae drill into the nutmeat where they become the primary cause of nuts being classified as ‘inedibles’, in addition to the risks that they cause due to their associations with Aspergillus sp. fungi that have the potential to produce aflatoxins.

Almond farmers battle navel orangeworm each year using an integrated approach that includes sanitation, timely harvest, mating disruption and insecticides. Winter sanitation serves as the backbone of the program by removing larvae from the orchard by destroying nuts remaining in the tree after harvest, and by preventing spring survivors from being able to find places to lay eggs. Timely harvest helps by removing nuts before they can be attacked, and by removing second or third-generation larvae from the orchard before they can contribute to the third and fourth flights of adults. Mating disruption is a relatively new technique that has proven to consistently provide approximately 50% reduction in damage when deployed using aerosol canisters or MESO emitters. Lastly, the fourth technique for controlling navel orangeworm is insecticides. This is typically done using products containing methoxyfenozide or chlorantraniliprole, both of which are selective and classified as reduced-risk pesticides by the U.S. Environmental Protection Agency. By using an integrated approach to navel orangeworm management, almond growers can typically avoid the need to use pyrethroids while controlling this pest.

Almonds represent just one example of the many California commodities where pyrethroids still play an important role in pest management, but where shifts away from pyrethroids can occur over time. As more integrated pest management programs are implemented, growers typically see an increased abundance of biological control organisms and an increase in overall sustainability. Decreased reliance on pyrethroids, and on-farm efforts to prevent off-site movement of pyrethroids in cases where they are still needed, are effective ways for farmers to participate in the shared role of all Californians to protect the quality of local waterways.

Figure 1. Annual acres treated with organophosphate and pyrethroid insecticides in the Sacramento Valley from 2000 to 2019. Source: California Department of Pesticide Regulation Pesticide Use Report data.

Figure 2. Annual pounds of active ingredient (a.i.) of organophosphate and pyrethroid insecticides applied in the Sacramento Valley from 2000 to 2019. Source: California Department of Pesticide Regulation Pesticide Use Report data. 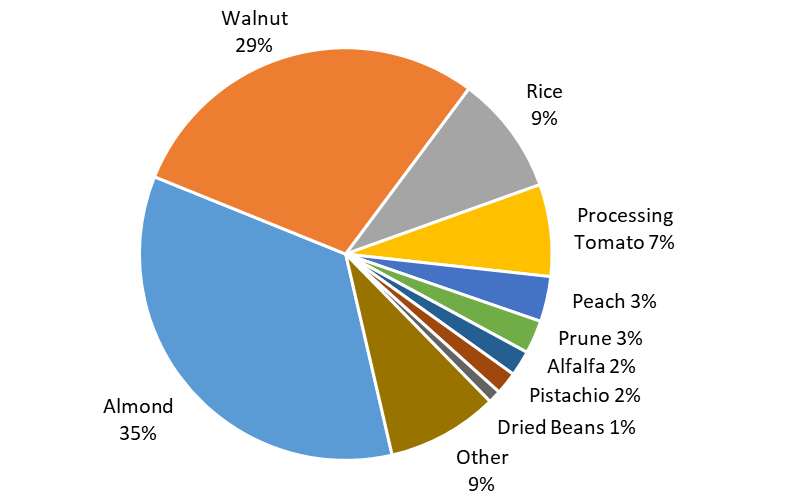 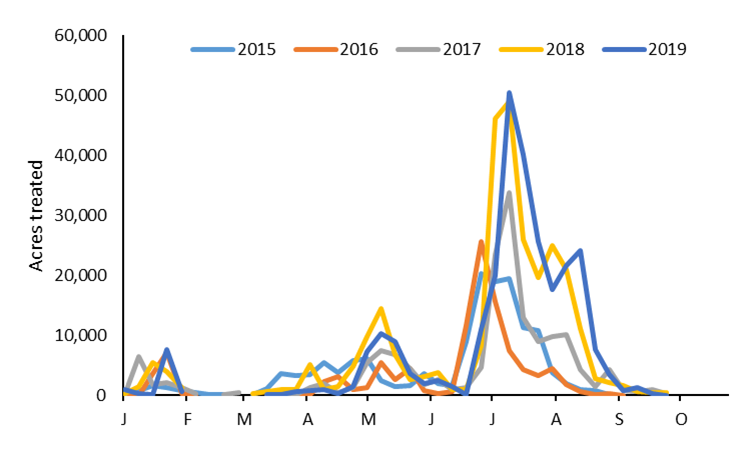