Rootstock selection is a complex decision, weighing multiple attributes in comparing rootstock choices. Attributes like vigor (a loose proxy for yield potential), anchorage, and suckering are all important considerations. However, arguably the most important attribute conferred by a rootstock during the establishment of a new prune orchard is that the genetic traits of the roots help the overall tree to survive and become a productive bearing tree.

Bacterial canker infections which although severe and often lethal, die out as the weather warms and do not continue to spread the following year. In other words, bacterial canker is an annual disease, instead of a perennial disease like Cytospora or Botryosphaeria fungal cankers. Although not being classified as a perennial disease may sound less terrifying, we all know that the results of bacterial canker are often lethal (photo 1) and even completely debilitating to orchard establishment (photo 2). The UC prune rootstock trial site north of Marysville in the District 10 area has served as an excellent test of 14 rootstocks planted into a hostile bacterial canker environment. The satellite image of this plot clearly shows several gaps of missing trees that are six trees in length (i.e. the number of trees in a rootstock treatment replicate, photo 2). Although there are several causes of tree loss in the plot, certain rootstocks have had very low survival in the same areas of the orchard where other rootstocks have 100% survival and vigorous trees (photos 2 & 3). For example, M29C (Myroblan 29C) an industry standard, had a mere 63% survival at the end of the 2018 growing season, while M30 and HBOK 50 fared even worse, at 59 and 45% survival, respectively (table 1). In contrast, Viking, Atlas, and Krymsk 86 have all had 100% survival. 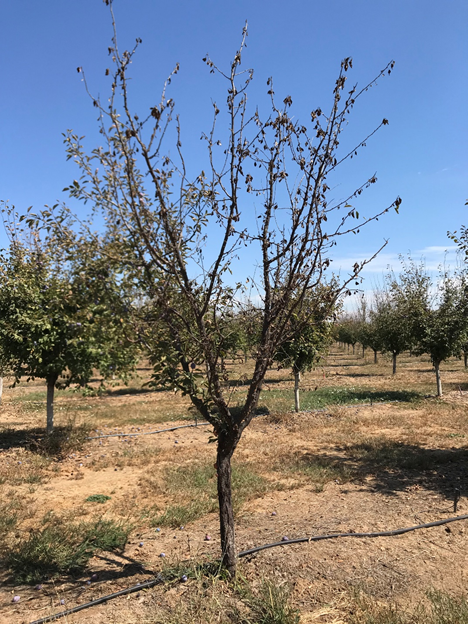 Photo 1. A tree at the Yuba rootstock trial site that likely died of a bacterial canker infection sometime after leaf out in 2018 (photo: Luke Milliron).

The patterns of tree loss, including occurrences where all six trees died, are new problem sites in the field. These areas of tree loss do not correspond to historic problem areas according to satellite image records of the previous prune orchard at the same location. This was a replant site of prune following prune. Because of a concern of carryover nematode populations from the previous prune orchard, Telone® fumigation was used at the site in the spring of 2011. A wet winter and late fumigation delayed soil preparation and subsequently delayed planting in 2011. Tree mortality was high during the first growing season. In 2012, Atlas and Viking rooted trees were planted for the first time (unavailable in 2011), and an extensive number of missing trees for other rootstock treatments were replanted. Tree loss counts didn’t start until after the planting and re-planting of 2012. 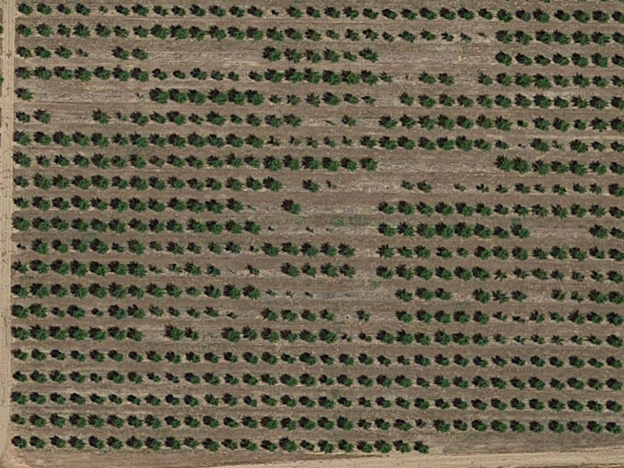 Table 1. The percentage of tree survival at the Yuba prune rootstock trial locations at the time of the 2018 harvest. Tree loss counts don’t start until after the planting and re-planting of 2012. Values followed by the same letters are not significantly different.

Rootstock selection is a complex decision, weighing multiple attributes in comparing rootstock choices. However, it is critical to choose a rootstock that, from all the evidence available, will give you the best chance of establishing a healthy and productive bearing orchard. Although these are site specific results and caution should be employed when extrapolating these results, the findings at this research plot may help inform orchardists who struggle against bacterial canker. 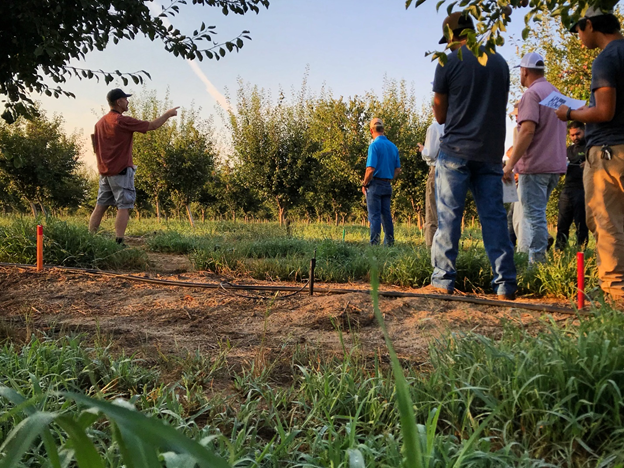 Photo 3. Franz Niederholzer (UCCE Colusa, Sutter-Yuba) stands in a clearing left by the mortality of a bacterial canker hot spot at the UC Yuba rootstock plot and points participants in a 2018 field meeting to the healthy and vigorous surrounding rootstock treatments (photo: Luke Milliron).