Don’t tie so close! Plus, other walnut staking considerations

Tying tight along the trunk!

Seeing young walnut trees tied so tightly to a stake that they appear glued, is not an unusual site. This often happens when stakes are placed at a poor orientation relative to prevailing winds resulting in more loosely tied trees banging against the stake. As a result, growers often end up tying the trees tightly to the stake. However, tying a young tree tightly to the stake can create multiple problems. If the tree is tied too tightly along the length of the entire stake, the buds along that side of the trunk will likely rub off, creating unbalanced branch development (photo 1). In extreme cases, the rubbing between the stake and the trunk can even wear through the critical vascular tissues that translocate nutrients and water (photos 2-3). 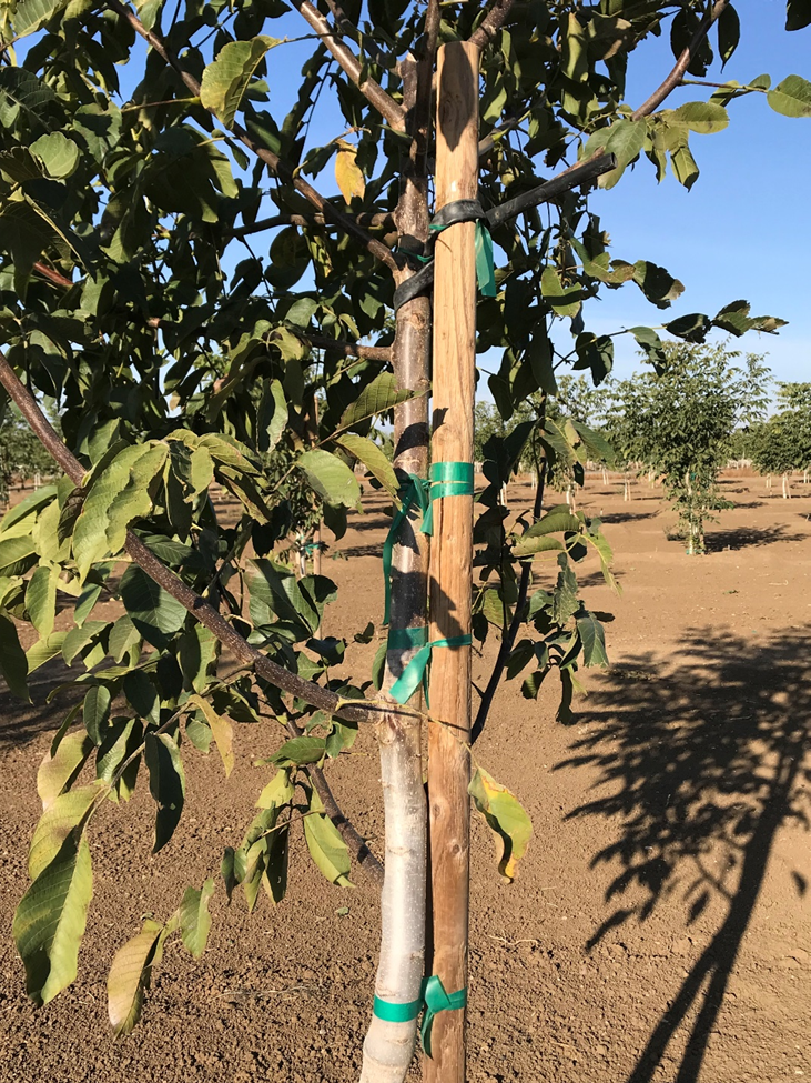 Photo 1. A second leaf walnut tree with the stake tied tightly against the trunk can create problems. One problem is that the buds along that portion of the trunk are rubbed off by the stake, creating uneven canopy development and more likelihood of wind related damage later (photo: Luke Milliron) 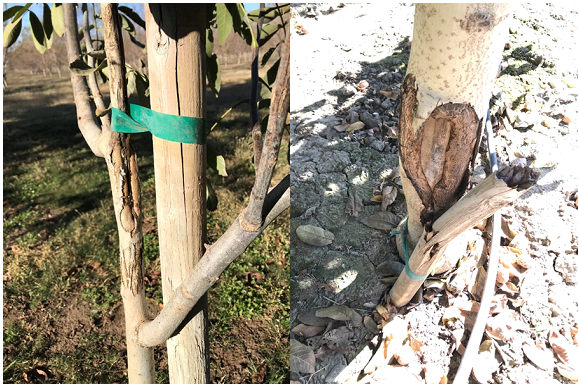 However, the results of tight staking can be more abrupt and severe than an unbalanced tree or rubbing damage. If the highest tie on the trunk is tied too tightly, subsequent winds can break that braced trunk at that top tie point because the trunk cannot flex (photos 4-5). Looser staking allows for more flexing which strengthens the trunk. 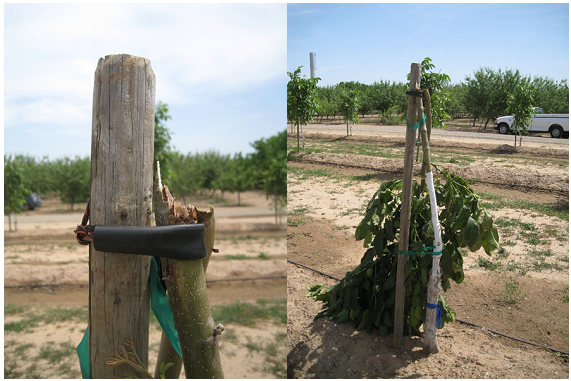 Photos 4 & 5. Show breakage of a young tree at the height of a very tight top tie (photos: Janine Hasey)

Skip the stake? Some growers don’t stake at all, even in windy regions such as western Tehama County. This works best if trees are not headed or at least headed quite high since a lower heading cut results in rapid growth that is more prone to bending and breaking in the wind. This approach allows for maximum movement and strengthening of the trunk, helping to prevent blow over and breakage. It is also an upfront labor and materials cost savings approach. If this approach feels too risky to you, keep reading.

Tie Loosely: Tying the trunk loosely to the stake has been the standard best practice  approach. This loose tying begins in the first leaf, otherwise known as the first growing year in the field with the English scion grafted or budded. The strongest shoot is loosely tied to the stake (photos 6-7). As this shoot grows rapidly throughout the summer and establishes as the trunk, additional loose tying is performed. With this method, it is important that the stake is placed in a good orientation relative to the prevailing wind direction to minimize chances of damage due to the tree banging against the stake. 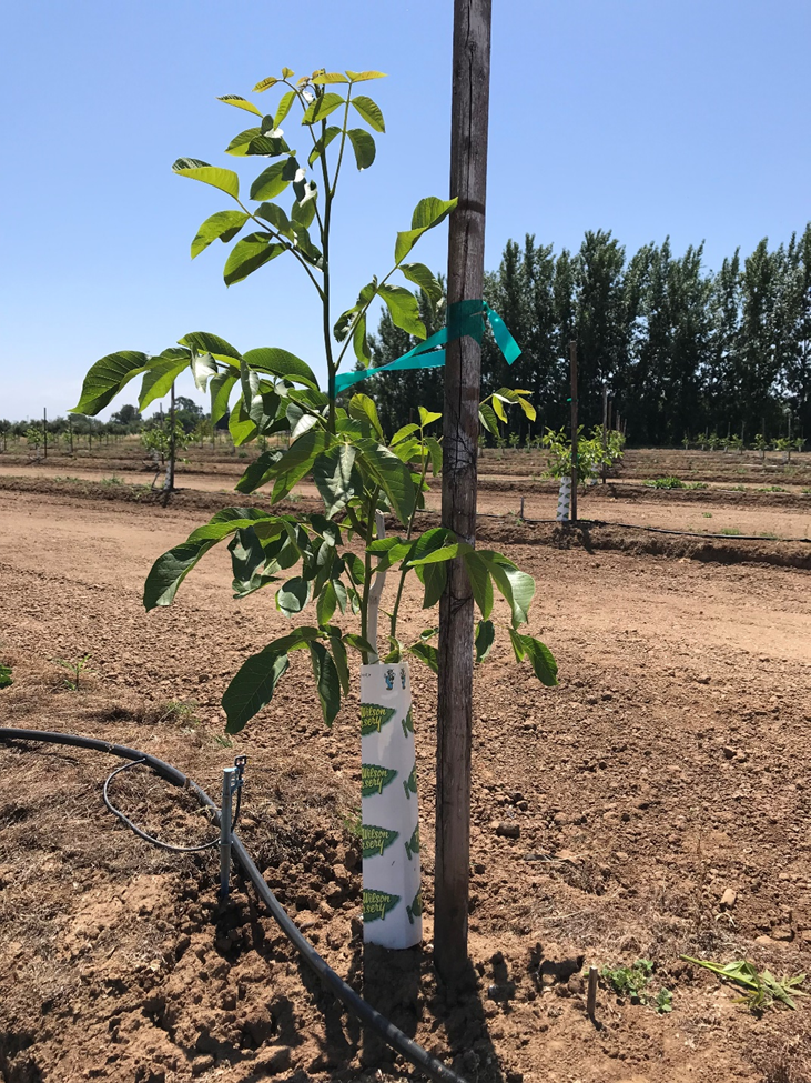 Photo 6. Just after selection of the most vigorous shoot to become the trunk and the initial loose tie for a 1st leaf walnut tree (photo: Luke Milliron) 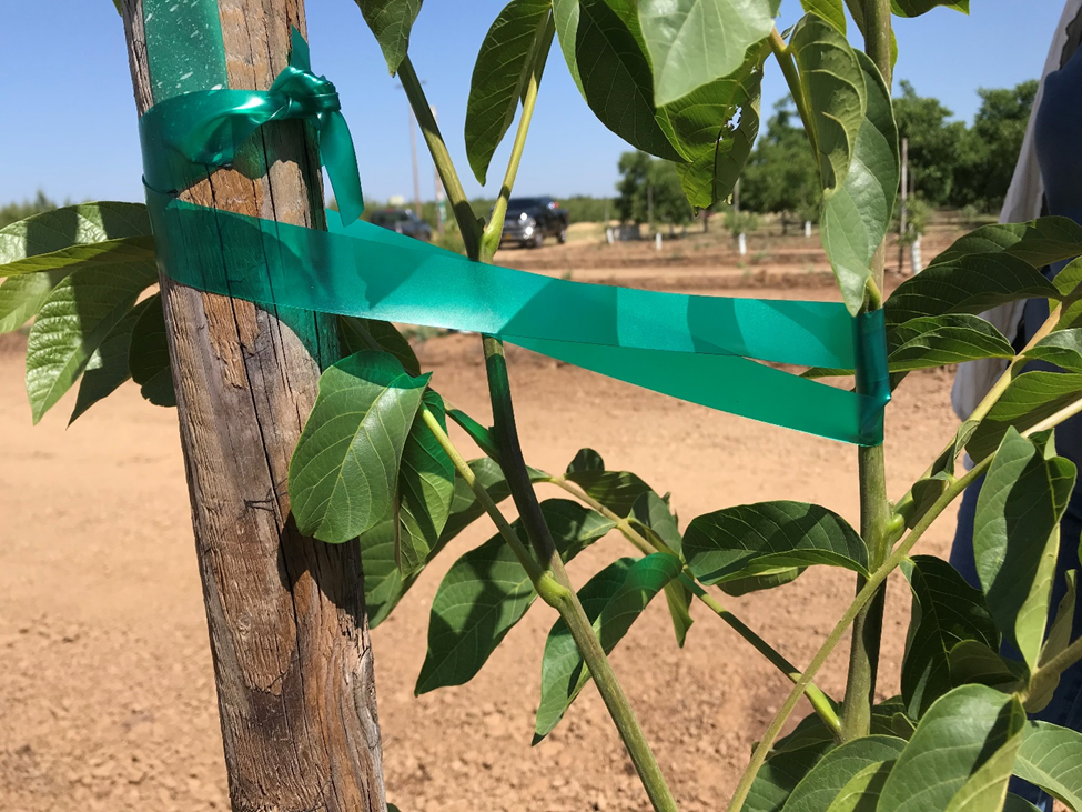 Innovative approaches: Some growers have found success with alternative loose tying approaches. One innovative grower tying approach utilizes reinforced drip tubing, twisted into a circle  that provides for the young trunk to flex in the wind (photo 8). Although there is an upfront cost to making the reinforced tubing, the setup can be reused in subsequent orchards.

UC Walnut Specalist Bruce Lampinen has found success with innovative staking materials in his trials. He now prefers to use metal stakes (5/16” by 8’ and 3/8” x 10’), which allows for more flexibility in the wind compared to wood stakes. Whatever stake and tying approach you choose, be sure you’re not tying too tightly. Instead, give young trunks the ability to flex and strengthen! 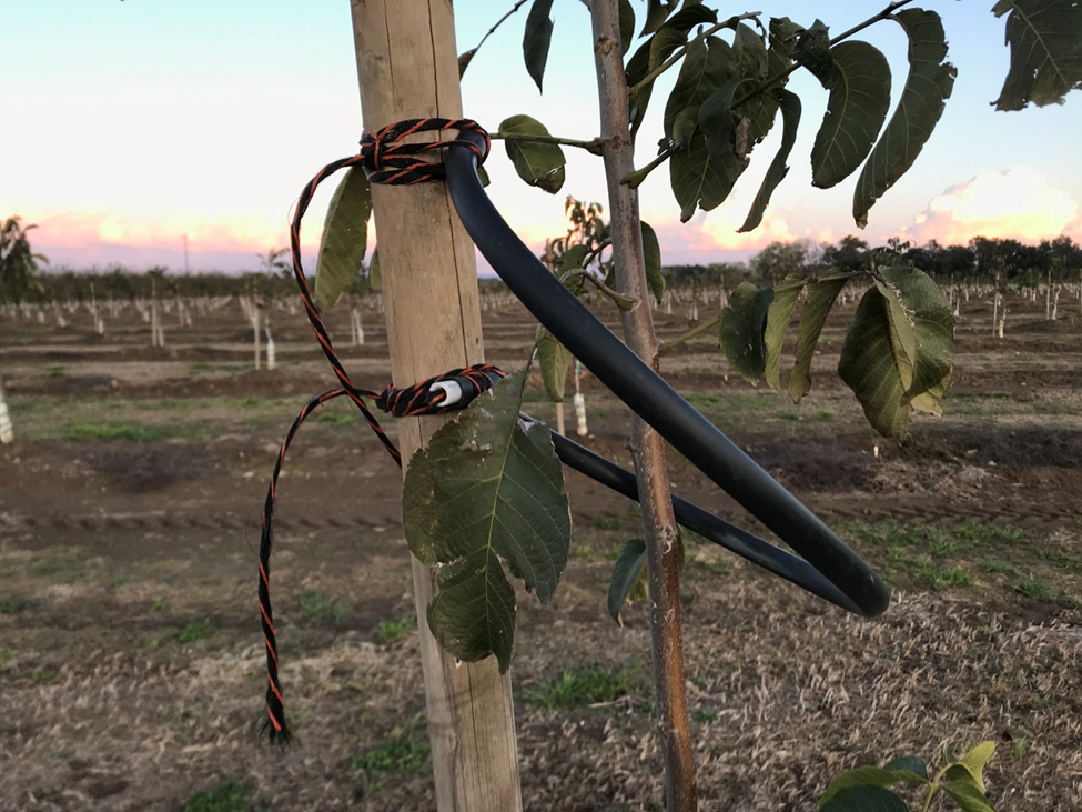 Photo 8. An innovative grower tying approach of utilizing reinforced drip tubing. This allows the young trunk to flex in the wind and the setup can be reused in subsequent orchards (photo: Luke Milliron)