Update on Rootstocks for Prune Production – 2019

Two rootstock experiments in grower orchards were planted in Northern California in 2011. One site in Butte County and a second in Yuba County. The two sites are evaluating the performance of Improved French on 14 rootstocks planted in replicated randomized trials. The sites share five standard rootstocks that already had widespread adoption in the industry, namely Myroblan 29C, Myroblan Seedling, Marianna 2624, Marianna 40, and Lovell. The sites also share eight test rootstocks, Krysmsk 86, Krysmk 1, Viking, Atlas, Citation, HBOK 50, Marianna 30, and Marianna 58. Rootpac-R is only at the Yuba location, and Empyrean 2 is only at the Butte location.

Rootstock survival:
Although the vigor imparted by the rootstock is an important consideration, survival in adverse conditions is the most valuable benefit a rootstock can impart (Table 1). Percent tree survival was assessed at both sites in 2019 and survival ranged from 10% (Empyrean 2) to 97% (Atlas) at the Butte site, and 37% (HBOK 50) to 100% (Viking and Lovell) at the Yuba site (table 2). There are notable differences and similarities in survival between the two sites. Myrobalan 29C, Myrobalan seedling and HBOK 50 have all had higher numerical survival rates at the Butte site than at the Yuba location where bacterial canker created significant tree losses, potentially due to bacterial canker susceptibility at the Yuba location (photo 1). It is unclear why Lovell, Krymsk 86, Citation, and Krymsk 1 have had numerically higher survival at the Yuba location. At both sites Atlas and Viking, which were planted a year later and in the case of the Butte site received spot fumigation before planting have had excellent survival (97-100%).  Marianna 40 and Marianna 2624 have also had good survival (80-87%). Marianna 58 has had intermediate survival performance at both sites (73% and 77%). Finally, Marianna 30 has had very low survival at both sites (43% and 37%) 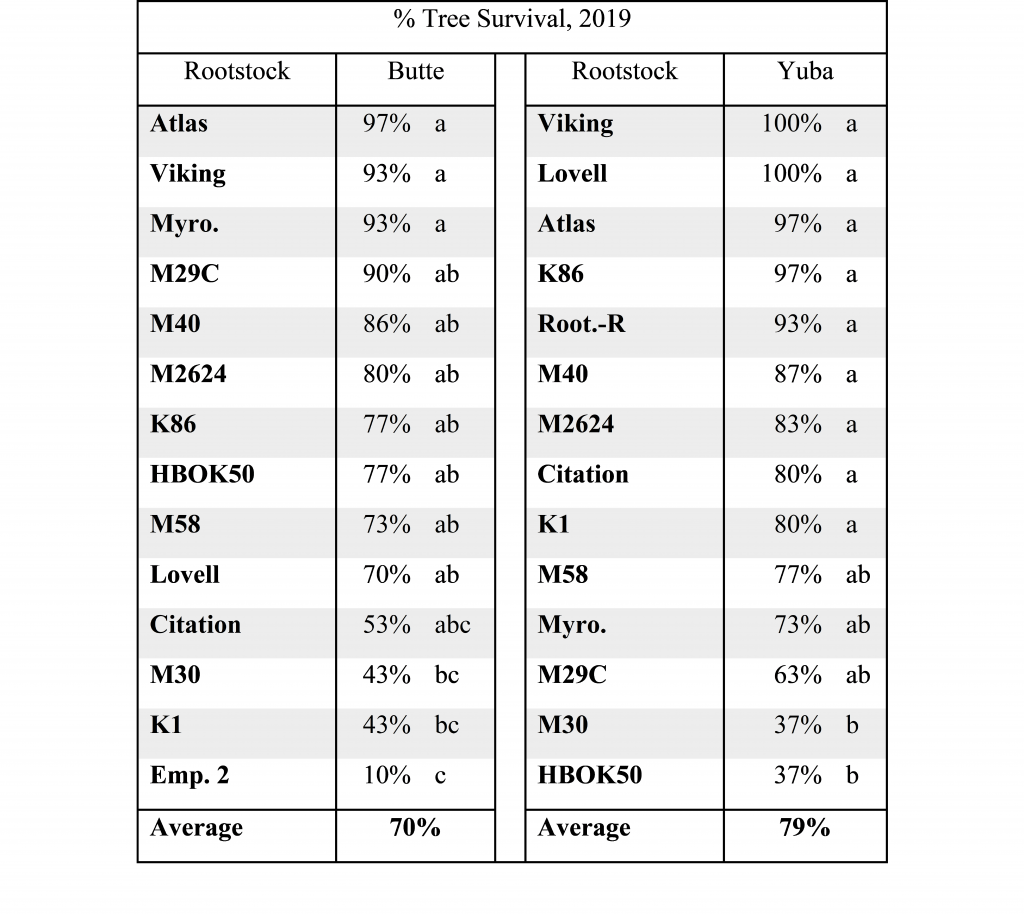 Table 1. Percent tree survival at the Butte (7 September) and Yuba (12 June) sites in 2019. Values followed by the same letters are not significantly different at 95% using Tukey’s HSD. 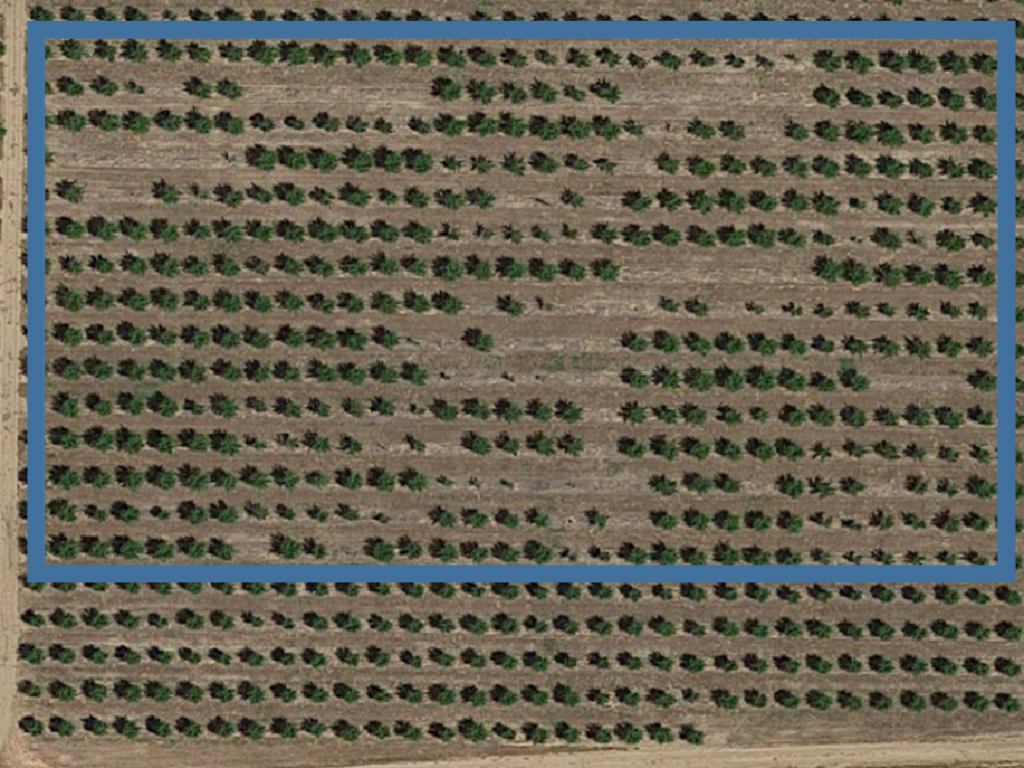 Photo 1. Satellite image of the UCCE prune rootstock plot (inside the blue line) in Yuba County showing differences in tree size and survival between different rootstocks. Although tree loss was likely from multiple causes, bacterial canker was a significant player. Each rootstock is planted in six tree groups down the rows running E-W. Note gaps of six trees show where a particular rootstock failed, adjacent to large, healthy canopies where a different rootstock is thriving. The grower’s trees, outside the blue line are all on M40. (Google©, Imagery Maxar Technologies ©2019, and U.S. Geological Survey map data ©2019).

Generally, larger trunks = larger, more vigorous trees with greater yield. Trunk diameter (in) for 2019 is shown for 2019 in Table 2. Myrobalan 29C and HBOK 50 had the largest diameter at the Butte and Yuba sites, respectively. The rootstocks imparting among the greatest vigor according to diameter at both locations were Myrobalan 29C, Viking, Atlas, Krysmk 86, and Lovell. Krymsk 1 had the smallest diameter at both sites. In addition to Krymsk 1; Marianna 58, Empyrean 2, Citation, and Marianna 2624 imparted the least vigor according to diameter. In general, trees were larger at the Butte site than in Yuba. 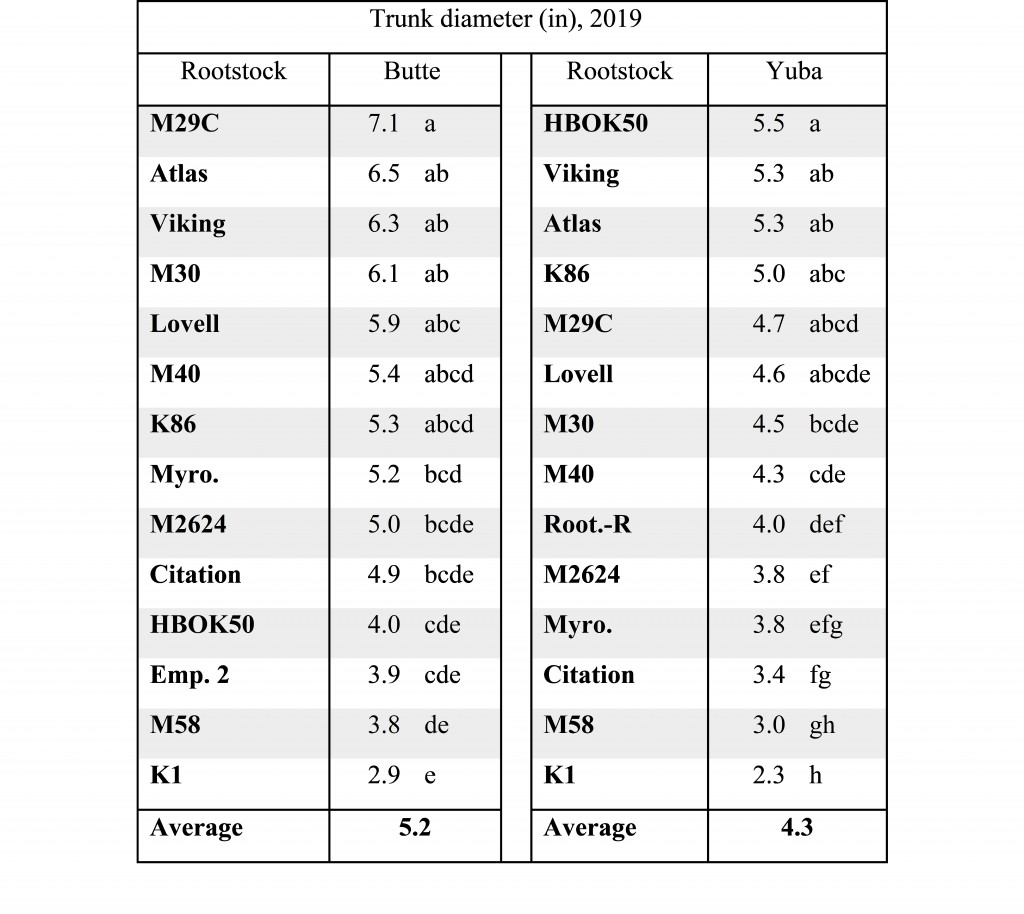 Table 2. Trunk diameter (in) at the Butte and Yuba sites in 2019. Values followed by the same letters are not significantly different at 95% using Tukey’s HSD, with letter order denoting highest to lowest.

Yield has been much more variable at the two sites. Together with trunk diameter, yields have been numerically higher at the Butte site. The exception of this was 2018, following potential over cropping in 2017 at the Butte site and poor return bloom density in 2018. Unlike trunk diameter, yield differences by rootstock have not been consistent at each site, year-to-year. However, Krymsk 1 has been amongst the lowest yielding rootstocks at both sites for every harvest. More harvests are needed to more clearly define yield differences between the rootstocks. Despite this variability, it has been true that generally yield increases with increasing trunk diameter (Table 1).

When interpreting yield results, it’s important to consider that all rootstock trials that impose the same spacing across the plot disadvantage lower vigor rootstocks that could have been placed at a higher density. Although yield generally increases with increasing tree size, there are some rootstocks that yield particularly well or poorly for their size. In 2019 at the Butte site, for example, Marianna 2624 and Marianna 30 had the highest yield efficiency, Empyrean 2 had the lowest and all other rootstocks fell in-between. Again, more harvest data is needed to enumerate which rootstocks are over- and under-yielding for their vigor. Some growers with an interest in lower vigor inducing rootstocks are beginning to trial high density plantings.

To see the complete yield, fruit size, bloom timing and density, leaf mineral nutrition, and tree water status results for this trial you can consult the 2019 Prune Board research report.

Rootstock suckers and anchorage:
In the 2016 article on early observation from the two rootstock sites through 2015 we focused on rootstock suckers and anchorage. Rootstock suckering was evaluated on a rating of 0-4, where trees with a “0” had no suckers at all, “1” had at most only a couple of very small suckers, to “4” where suckers were both numerous and large. At both sites Myroblan seedling had the highest sucker rating. Conversely, Atlas, HBOK50, Viking, Citation, Marianna 58, Krysmk 86, Lovell, and Marianna 40 all were rated below a 0.5 at both sites. Anchorage was evaluated by measuring the degrees of lean from vertical when each tree was pushed with an equal force. There was much more lean at the Yuba site, which is on a Kilga clay loam, over hard pan where soils were wet at the time of evaluation. However, at both sites Krymsk 1, Marianna 58, HBOK 50, and Citation average above 4% lean. At both sites, Krymsk 86 and Viking averaged the least lean. In these evaluations of suckering and anchorage, Krymsk 86 and Viking had among the best performance at both sites.