An April frost can have potentially devastating results. The last severe spring frost occurred in April 2008. During a frost event, there are many factors that influence whether or not frost damage will occur in a particular orchard. This article provides guidelines should a spring frost occur.

What happened and what damage can be expected?

The 2008 event was a radiation frost that caused widespread and substantial damage to fruit and nut crops in Sutter and Yuba Counties. Radiation frosts occur when skies are clear, winds are calm, and humidity is low. Cold air does not move in and replace warmer air. Instead, the existing air mass cools as heat is radiated to the sky. In other words, the tree leaves are radiating (losing heat) to the cold night sky. That is why, for example in walnuts, much of the damage was seen higher up in the trees in 2008. Conversely, advection frosts are associated with wind and typically occur when a large cold air mass moves into an area.

Bearing and young walnut trees suffered damage during the 2008 radiation frost event. For bearing trees, walnut flowers and small nutlets can only endure 30oF for 30 minutes without suffering damage. In 2008, sustained air temperatures below 30oF possibly occurred for as much as two hours. More frost damage was observed on walnuts that were not as leafed out, such as Howard, Chandler, Tulare and Vina compared to earlier walnut varieties like Serr that had hardened more against freezing. More leaves at the tops of the trees probably protected the lower leaves, buds, etc. from exposure to the sky.hotos 1 – 3: Frost damage on Vina walnut, April 20, 2008.

Frost damage symptoms.  In walnut, where leaves were blackened from frost damage, the flowers and small nutlets should be cut (unless it is evident from outside) to determine damage which will be black to varying degrees (Photos 1-3). Young walnut trees also had variable frost damage in 2008. If a frost event occurs and black leaves are seen, cut inside the limbs to see if there is brownish tissue damage (Photo 4). 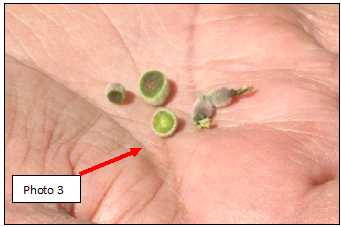 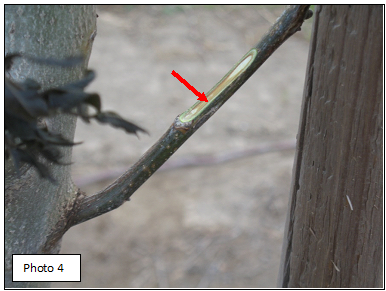 Can damage be prevented? Perhaps not entirely, but some damage may be reduced with a few key actions. Ensuring soil moisture, particularly in the top foot is critical to mitigating frost damage, because this moisture allows for more heat storage during the day. The top foot should be at field capacity (not too wet) and there should be no dry surface crust that prevents heat from being stored during the day and released at night. If rainfall is inadequate to meet these conditions, irrigate before the frost event. Irrigating three to four days before the frost event would have helped with the radiation frost we had in 2008.

As for orchard floor management, bare firm moist soil is warmest. Groundcover should be mowed to two inches or less before the frost to allow sunlight to warm the soil during the day. Cover crops, and other groundcover greater than 2 inches tall prevent solar radiation from reaching the soil surface during the day thus storing it for release at night. Another potential impact of groundcover is ice-nucleating (IN) bacteria. These bacteria reside on grasses and weeds which can lead to more IN bacteria on the trees that can also increase frost damage. As the orchard leafs out in full canopy orchards, whether there is groundcover or not, becomes less important since the tree foliage blocks sunlight from reaching the surface. In 2008, the orchard floor management system appeared to have little effect on damage severity.

Can running irrigation during a frost event help? In 2008, several orchards that were irrigated during the night of the frost still had frost damage. Joe Connell, Farm Advisor Emeritus, notes that sprinkler frost protection works best when systems are engineered to provide a flow rate of 40 gpm/ac and there are not advection conditions. Helicopter frost protection may also be helpful in a radiation frost event, but not during an advection frost event, when cold air moves through, often on a regional level. To help predict the potential for a frost event, check the dew point temperature before retiring for the night. When the dew point is above 45o, frost is rarely a problem.  For more information on frost protection and when to turn on and off under tree sprinklers to prevent frost damage, visit the biometeorology website.

What to do if frost damage occurs?  If the frost damage is countywide, estimate the percent frost damage in each orchard and report it to your local agricultural commissioner. If crop damage reaches 30 percent production loss county wide for at least one crop, the Agricultural Commissioner has three months from the end of the disaster to request disaster assistance.