Now that the 2016 season has come and gone, it is a good time to reflect on pest management issues and use information learned to improve our IPM program in the coming year. Navel orangeworm (NOW) appeared to be a significant factor again in 2016 in harvest damage assessments. Of particular concern was the earlier-than-typical, and in some cases, spread out husksplit observed in later varieties, which have historically been considered less vulnerable to significant levels of worm damage. A number of growers and PCAs were caught off-guard by the worm damage present in these varieties in 2016.
Some considerations when planning your integrated NOW management program for 2017: 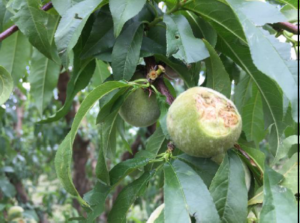 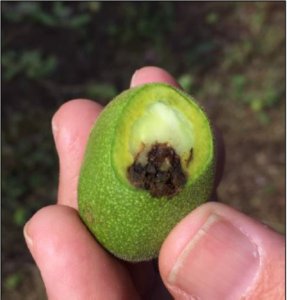 Walnut with damage from a hailstorm in May, 2016. Photo credit: J. Hasey.

In short, don’t take your eye off NOW in walnuts, no matter what variety you grow. Much research is still needed to determine the relative importance of a number of factors that may contribute to NOW damage (e.g., native versus immigrant populations; proximity to external sources; previous season’s damage; orchard sanitation; overwintering populations; in-season codling moth, blight, and sunburn damage; degree day accumulation; populations cycles in surrounding crops; harvest timing; ethephon application; pesticide choice and application timing; and various environmental conditions). In order to answer the outstanding questions, large data sets will provide the most value.