Irrigation with Roots in Mind

In addition to anchorage, a key role of roots is the uptake of water and nutrients. Although roots are responsible for water uptake, roots do not function well when exposed to too much water and will stop growing and eventually die in stagnant and/or saturated soil conditions. We consider how a better understanding of root biology can inform best irrigation practices.

When do roots grow?
There is a false understanding in walnut production that there is a flush of root growth in both spring and fall. In fact, there’s even a figure in the 1996 UC Walnut Production Manual that shows these two flushes of root growth where the fall peak is larger than the spring peak. Recent work in the Chandler variety by Bruce Lampinen and his lab at UC Davis instead showed that in most years, there was a single major root flush that peaked in late June (figure 1). During this period of root growth there is continuous fine root production. These new fine roots are responsible for most nutrient and substantial water uptake. There is a constant turnover in fine root production during this period, with new roots being produced, and older roots dying, or (after about two weeks) suberizing and becoming part of the water and nutrient transport system instead of an active site of uptake. Occasionally there was a small flush of root growth in late summer/early fall, but this amount was substantially lower than the spring flush. 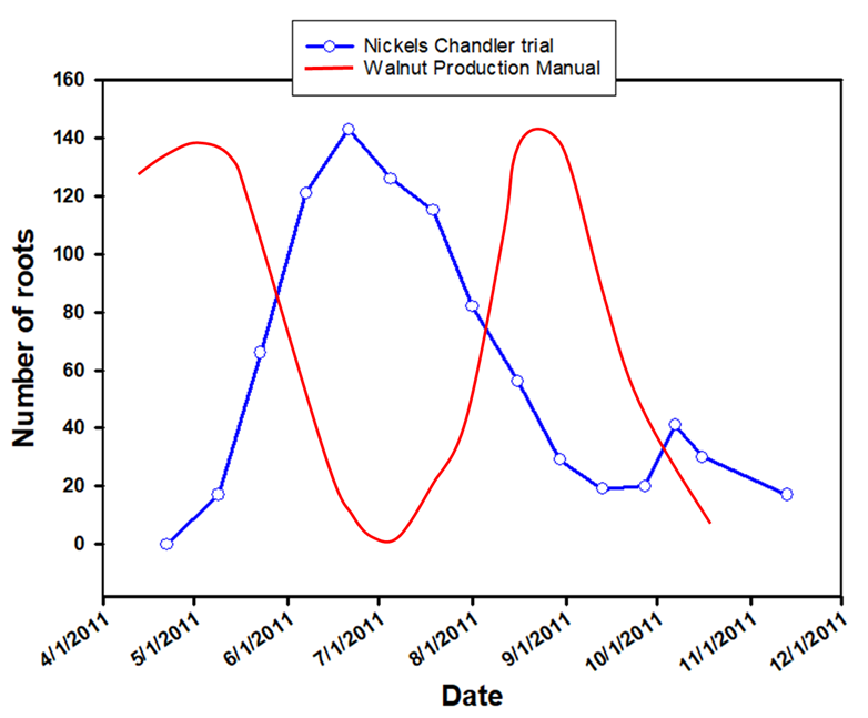 Figure 1. Number of roots over time in Chandler on Paradox Seedling (2011 Nickels Soil Lab in Arbuckle, CA) versus what is shown in the 1996 Walnut Production Manual.

Where are the roots located?
The fine roots are concentrated in the top two feet of soil. However, declines in soil moisture from spring to fall indicate substantial water uptake from roots located in deeper soil layers where moisture is still available when soils allow for deep root growth. If the soil is allowed to dry more near the surface, or there are subsurface sources of water such as water tables, these deep roots can contribute substantially to water uptake. Deeper roots are generally coarser and have longer lifespans than shallower roots.

How are roots affected by wet and dry conditions?
During the single spring root flush there can be tremendous long-term damage to root and tree health from extended saturated/stagnant soil moisture conditions. New root tissue requires lots of oxygen because roots respire by breaking down carbohydrates for energy, just like humans. Carbohydrates are transported from the shoot to the roots and the breakdown of these carbohydrates into energy for root growth and nutrient uptake requires substantial amounts of oxygen. Flooding of soils strongly reduces the amount of oxygen available to the roots. When roots are deprived of oxygen during saturated soil conditions, new root production is the first process to stop. If low oxygen conditions continue, root death and eventually tree death can ensue. Thus, if you saturate the soil during spring conditions, root growth will be limited to the topsoil where oxygen is still somewhat available. Conversely, work by Bruce Lampinen and Astrid Volder showed that a water deficit during root flush promoted a flush of root growth from roots deeper in the profile where soil moisture was still available.

Irrigation Management Implications:
The halting of fine root production and the eventual process of root death due to stagnant and saturated conditions have obvious implications for flooded conditions. We discuss preparing for flooded conditions here. The negative root health impacts of saturated conditions also mean long irrigation run times leading to standing water should be avoided. The negative impacts of sustained wet conditions have been well documented, including the development of leaf damage symptoms. In such cases it is wasteful to apply more nutrients, the simpler solution is to reduce irrigation and allow root growth to occur. During the 2019 season there were walnut trees in the Sacramento Valley with yellowing and collapsing canopies, most likely due to wet conditions earlier in the season.

Conversely, drier, better aerated conditions during the root flush may promote growth from deeper roots with greater water uptake by deep roots. Research has shown that using the pressure chamber to delay the first irrigation until stem water potential readings fall two to three bars below (drier then) the fully watered baseline (typically in June), lead to trees with a healthier appearance that are less water stressed trees at harvest. This beneficial result of delayed irrigation may be due to greater root development and exploration during the May-June root flush, which leads to a greater volume of soil moisture accessible at harvest. Although deep roots can access stored soil moisture and play a critical role early in the season, if you run long irrigation sets in an attempt to replenish deep soil moisture during the irrigation season, the most important roots in the top two feet and tree health overall will likely suffer from poor aeration. You can read more about the study here. The pressure chamber not only allows for a delay of irrigation early in the season, but it’s a great integrated measure of tree water status, especially considering we never know the location of all roots contributing to water uptake. A step by step guide on using the pressure chamber is available here.

This article is based on a Growing the Valley podcast discussion with Dr. Astrid Volder at UC Davis. You can learn more about roots, including how we should fertilize and prune with roots in mind here.