Monterey and the Leafing Failure 2020: What are we seeing?

In 2018 Dani Lightle reported leafing failures in Monterey following several calls she investigated. In 2020, UC advisors, specialists, and professors are again receiving calls reporting leaf out issues in several almond varieties, most notably in Monterey (photo 1). Numerous advisors have seen similar symptoms on young Bennett Hickman trees, however, our understanding of this is still evolving (photo 2). In the case of Monterey, growers and PCAs started reporting leafing failures in mid-March 2020, in the Sacramento and San Joaquin Valley on several rootstocks and from several nursery sources. Reports are mainly in bearing orchards, but farm advisors have seen symptomatic Monterey trees as young as second leaf. At least one northern Sacramento Valley grower with an orchard that should be entering its prime, is seeing declining Monterey yields after experiencing the issue in multiple years, and the grower now plans to remove all Monterey trees (50% of the orchard). Although there have been numerous reports of the problem this year, it’s important to note that there are many orchards, including those with Monterey, that are seeing very little if any of this problem.

In minor cases, growers are seeing leaf out delays on a couple branches and in severe cases there are no viable vegetative buds, only nuts on several branches. The incidence of affected trees is also highly variable, ranging from a couple of edge trees to a high proportion of the Monterey in the orchard. Generally, if you cut into the bark of affected branches and shoots, the vascular tissue remains green and alive.

As in 2018, these leafing failures largely remain a mystery. We are continuing the convention established by Dani Lightle, in referring to this problem as “leafing failure”. This term aptly describes that vegetative buds do not push, at least initially (photo 3). Other terms that have been used to describe the phenomenon include “pseudo bud failure” and “environmental bud failure”. 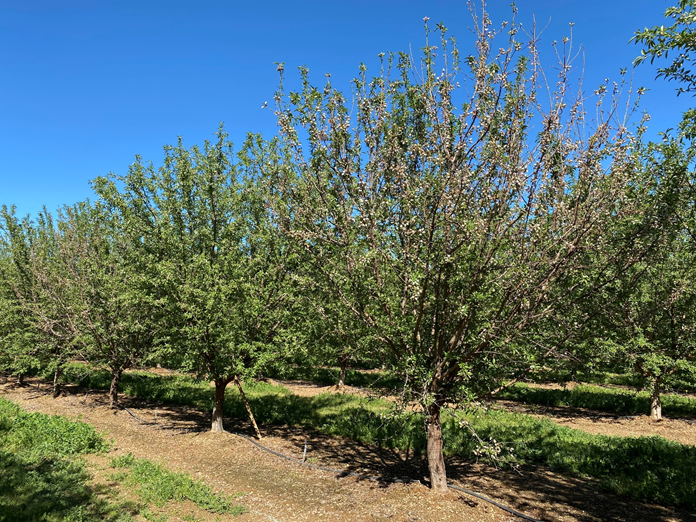 Photo 1. A fifth leaf row of alternating Monterey and Nonpareil on Krymsk 86 in Tehama County. Although the Nonpareil trees showed subtle symptoms of leaf out delay, many of the Monterey trees (e.g. foreground tree) showed severe symptoms (photo by Luke Milliron, March 19, 2020). 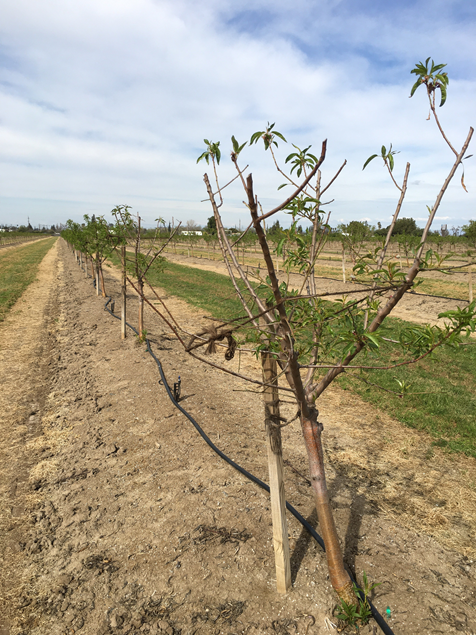 When confronted with an orchard where leaf out has been delayed, or leaf out has been poor, first look very carefully at the symptoms and examine other known causes of tree decline. Before jumping to the conclusion that what you’re seeing in the field is “that mysterious Monterey problem the farm advisor was talking about”, check whether the wood is still green and healthy. What is mysterious with orchards we are seeing is that neighboring trees of a different variety generally look healthy and vigorous.

A known reason that trees fail to leaf out normally is non-infectious bud failure (NBF). NBF, most seen in Carmel, but also documented in other varieties, including Nonpareil. NBF is a chronic genetic disorder that can be linked back to the original budwood, source and is a problem exacerbated by the environmental component of hot spells in June. With classic NBF, vegetative buds completely fail to go into dormancy and have likely already died by the previous fall. NBF is irreversible both within individual trees, and clear back to the nursery budwood used to propagate the trees.

Researchers make a distinction between leafing failure and the non-infectious bud failure (NBF) experienced by Carmel and other varieties. As opposed to bare shoots on which no buds have broken, we are generally instead seeing vegetative buds that are late in pushing or push on some parts of the branch but not others (photo 3).

Although the leafing failure has been seen more often in particular varieties, especially Monterey, and thus has a genetic link, it’s far too early to say what is “going wrong” genetically. Given that we’re not seeing these symptoms in all the trees of a particular variety, or all years, we suspect there is also an environmental component. In other words, there may first be a genetic predisposition or vulnerability, and then environmental factor trigger this predisposition to express itself as leafing failure. There may also be additional factors that help explain why some trees of the same variety and in the same orchard show leafing failure, while others do not.