A Need for Winter Irrigation?

Since mid-January the lack of rainfall has become top of mind, and we have an updated precipitation picture as of late February 2020.

Monitoring and responding to dry conditions:
DWR has an 8-station index report of Northern Sierra precipitation, the index was only at 64% of average as of January 22. However, following a dry February, that statistic had slumped to only 50% of average as of February 28. You can see for yourself where the index is now and how this season is tracking against historical highs and lows. Barring major rains in the spring, the 2019/20 winter is shaping up to be among the driest on record.

Another great resource for tracking the statewide water situation is to follow the U.S. Drought Monitor for California, which is produced through a partnership between the National Drought Mitigation Center at the University of Nebraska-Lincoln, the USDA, and the National Oceanic and Atmospheric Administration. As of February 20, the Sacramento Valley was designated “abnormally dry” and parts of the southern San Joaquin Valley were designated “moderate drought”. 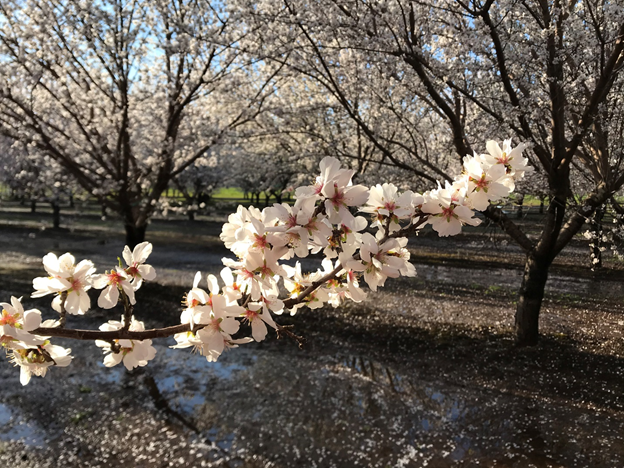 Photo 1. A recently irrigated almond orchard at bloom (see wet foreground). Not irrigated due to frost protection, but due to prolonged dry conditions (February 22, 2020, by Luke Milliron).

Sacramento Valley Precipitation Totals:
We have periodically reported the status of winter precipitation in recent years. The winter is a time when evapotranspiration (ET) is low and it is an opportunity to refill the soil profile in your orchards prior to the next season. Some benefits include: 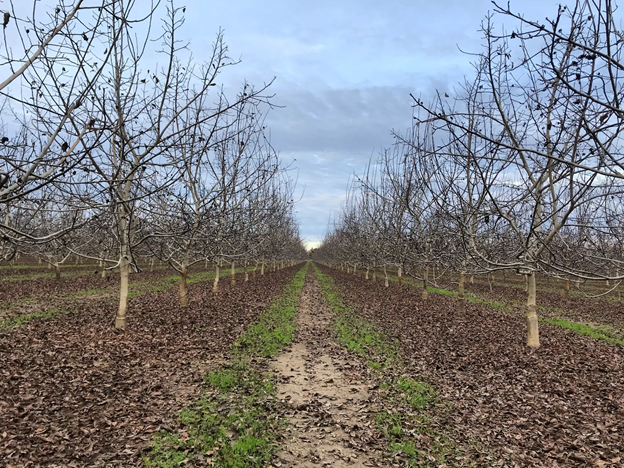 By tracking rainfall, it’s possible to substitute irrigation for a rainfall shortage on a monthly basis beginning in December. Ideally enough rainfall in combination with irrigation is received to refill the deep soil profile. Tables 1-4 demonstrate the idea of tracking rainfall to help gauge if and how much winter irrigation might be needed. The tables show average monthly rainfall and total rainfall for four different areas in the Sacramento Valley and they compare these averages to the amount of rainfall measured in the 2019/20 winter season. Of course, not all rainfall is effectively stored in the soil profile as it depends upon the soil conditions and intensity of the storm and the weather conditions between storms. When the weather is warm, dry, and windy, there is a greater chance of more evapotranspiration from the resident orchard vegetation. As a rule of thumb, on average only 50 to 60 percent of actual rainfall will likely be effectively stored in the soil profile.

Tables 1-4 shows total rainfall in 2019/20. In 2019 despite some areas receiving rain in November, the 2019/2020 rainfall totals to-date (October through late February) have been well below-average. Rainfall during this period has ranged from a low of 1.8 inches in Woodland to a high of 7.4 inches in Durham, with weather stations near Red Bluff and Williams falling in-between. If typical water holding capacities of soils are estimated to range from 1.5 to 2.0 inches per foot of soil profile and the effectiveness of rainfall stored is on the order of 60 percent, this suggest that most orchard soil may have only been refilled from rainfall to at most a depth of about 3 feet and quite possibly less. Although site-specific considerations are needed, it also suggests that winter irrigation in the amount of 3 to 4 inches might begin to compensate for the lack of rainfall in February. This level of supplemental irrigation could still leave space in the soil profile to store rainfall if the spring weather pattern shifts from dry to wet.

As always, using site specific rain gauges rather than depending upon regional weather stations some distance away will improve accuracy in assessing your specific situation. Soil moisture sensors or ground truthing with an auger will give you the best indication of how much the soil-profile has refilled. Also, it’s possible to split winter irrigations into sets, say apply 1.5 inches in one week. Wait a week or ten days and assess the short-term weather forecast for rainfall, since they tend to be far more accurate than long term forecasts. Then decide whether to apply another winter irrigation.

Checking soil moisture by hand is a basic method that allows you to quickly evaluate storage of rainfall and need for winter irrigation in different orchard soils. There are many online stores where soil augers can be purchased (consider: JMC Backsaver, AMS samplers, and Forestry Suppliers. Choosing equipment that allows you to easily and rapidly evaluate soil moisture depletion by feel is critical to making this practice part of your routine. The USDA NRCS publication Estimate soil moisture by feel and appearance can help you hone this skill.