Has It Been a Wet Winter?

The 2021-2022 water year, which began on October 1st, got off to a promising start. Precipitation patterns brought snow to the mountains and rain to the valleys in amounts not seen for a few years. Unfortunately, a relatively dry January snapped us all out of dreams of a “normal” year and brought us back to our new (drier) reality. Four months into the water year and season averages are still up from last year in each of the six stations we’re monitoring. While the numbers are better than some seasons in the recent past, the comparative lack of rain in January warrants some level of caution.

Not surprisingly, reservoir levels are still low across the region. Currently, Shasta Lake is at 36% capacity, Lake Oroville is at 46% capacity and Black Butte Reservoir is at 28% capacity. Similarly, snowpack totals in the Sierra mountains have dropped below 100% of normal for the first time this water year, although all three regions (Southern, Central, and Northern Sierra) are still at 85-90% of normal for the period.

With a relatively strong start this fall, rainfall totals for this 2021/2022 water year have exceeded historical average monthly rainfall totals for stations throughout the Sacramento Valley (Tables 1-6, some CIMIS values are flagged for possible inaccuracies). In each of the six Sacramento Valley CIMIS stations listed below, 2021-2022 rainfall levels have surpassed those of the previous two years. Three of those stations, Shasta (CIMIS #224), Williams (CIMIS #250), and Woodland (CIMIS #226), have recorded 5-year highs (Tables 3,4, and 6). Still, January was particularly dry, with precipitation totals of less than one-tenth of an inch in five of the six stations. The Shasta station alone posted appreciable rainfall, which was still less than half the January average for that station (Table 3).

So, where’s that water now?

Of course, not all rainfall is effectively stored in the soil profile, as it depends upon the soil conditions and intensity of the precipitation event. Wetter soils and those with rolling topography will be more prone to runoff, especially during more intense storms. Light showers may be prone to evaporation, especially if they are followed by warmer, sunny weather. An orchard floor with vigorous winter vegetation will do a better job of capturing winter rainfall and preventing runoff, but also transpires water, reducing stored moisture. Generally, expect that approximately 50 to 60 percent of rainfall will be effectively stored in the soil profile as “effective precipitation” (EP). Still, it is likely that many Sacramento Valley orchards entered January 2022 with a full, or nearly full, soil profile. With the current break in precipitation, now is a great time to check soil water storage to better gauge when supplemental irrigations may be needed. 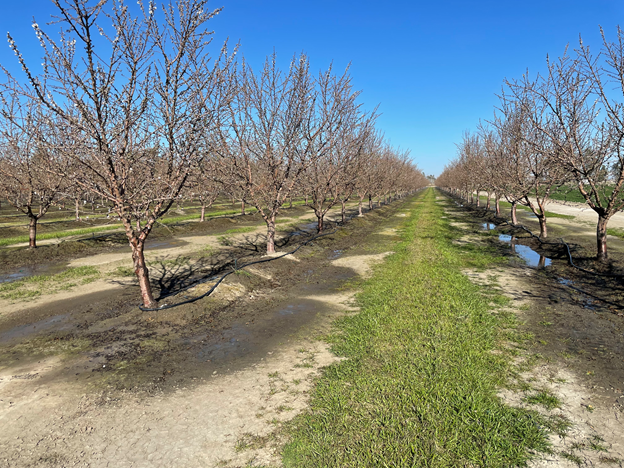 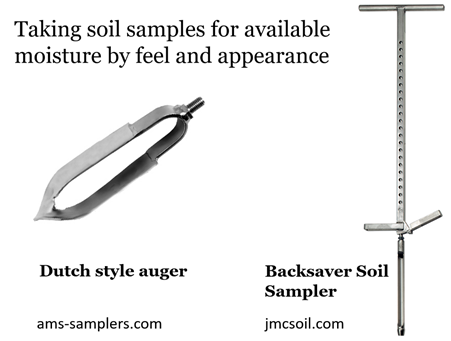 Deciding when to start the irrigation season is arguably one of the most critical decisions for irrigated orchards. The goal is to make sure your trees have the moisture they need while avoiding tree damage and the suppression of vital new root growth from unintended anerobic conditions. The three main irrigation management approaches that can help you decide early season irrigation timing are water potential monitoring with a pressure chamber (pressure bomb) device, evapotranspiration (ETc) replacement scheduling, or soil moisture monitoring. While the pressure chamber is the most direct approach to determining the need for orchard irrigation, ETc and soil moisture provide valuable information on the amount of water “used”, and the extent of irrigation replenishment, respectively. See this link for more information on these three approaches, and how to approach the start of your irrigation season.