You’re certainly familiar with the differences in almond hull split and subsequent harvest timing between different varieties. A typical case of this can be observed with early splitting and harvest of Nonpareil relative to other later varieties. However, you may not often think about differences in hull split influenced by rootstock.

The perfect place for observing differences in hull split timing between rootstocks is a rootstock trial overseen by Joseph Connell (UCCE Farm Advisor Emeritus) in Durham, CA. The replicated, and randomized trial currently hosted by Deseret Farms of California was planted in 2010. Six rootstocks are being evaluated: Lovell, Krymsk 86, Atlas, Empyrean 1, Nickels, and Rootpac-R.

The approximate order of Nonpareil hull split in the trial influenced by rootstock in both 2018 and 2019 from earliest to latest was Rootpac-R, Lovell, Atlas and Krymsk 86, and finally Nickels and Empyrean 1. While Rootpac-R was ready to shake around July 30, 2019, the much larger Empyrean and Nickels rooted trees weren’t ready to shake until August 16th, over two weeks later. 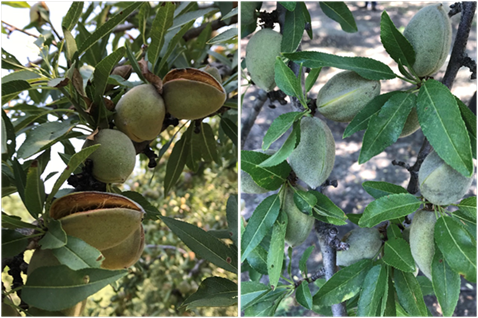 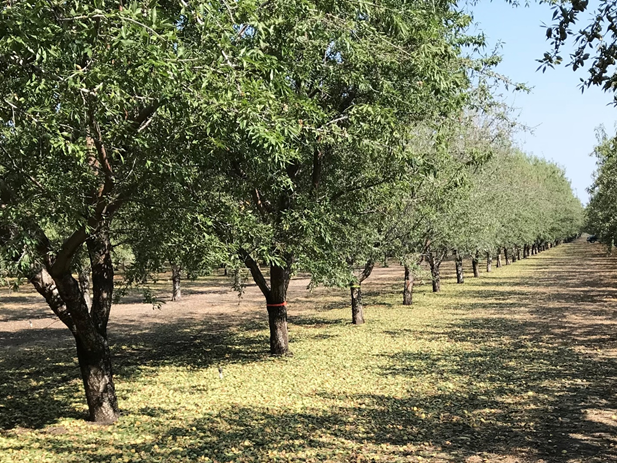 Curious for more results from UC almond rootstock trials? Attend the 2019 Almond Conference! Or check out the complete 2017/2018 findings.

Curious for more information on what determines hull split timing?
The Almond Doctor Blog on “What influences hull-split timing?”, which focuses on variety and weather effects. You can also try the UC Davis Fruit and Nut Research & Information Center Hull Split Prediction Model, which again accounts for variety and weather effects.  Finally, harvest maturity differences between different almond varieties at the previous generation of trial sites, planted in 1993 (see Table 3).

Special thanks to Joseph Connell, UCCE Farm Advisor Emeritus) investigator in Butte County, cooperator Deseret Farms of California, Fowler Nursery, and the Almond Board of California for supporting this rootstock trial of tremendous regional importance!

One Response to Hull split timing differences by rootstock?