Postharvest irrigation in a dry autumn?

Almond, prune, and walnut harvests are behind us, what postharvest irrigation(s) have you put on your orchard? Rainfall has been absent in October and November (as of this writing). Despite this lack of rainfall, our tree crops continue to lose water. It is important to consider irrigation of perennial tree crops leading up to dormancy to foster carbohydrate storage in the trees and to guard against the occurrence of freezing temperatures in dry orchards putting them at more risk to cold injury.

It is still early going for the orchard carbohydrate observatory, led by Dr. Maciej (Dr. Z) Zwieniecki at UC Davis. However, results to-date suggest it’s best to avoid premature leaf defoliation. Leaves are the carbohydrate accumulating factories of the tree and sustaining these factories into autumn could help finish the season off with healthy levels of this critical currency needed for all their activities. You can explore the observatory’s data for yourself! If there are leaves, there is continual water loss through transpiration. You can consider replacing all or a portion of orchard water loss, after first accounting for contribution from any rainfall and stored soil moisture.

The warming affects gained by having the top foot of soil moisture at field capacity during a freeze event is a particularly stark reminder to pay attention to soil moisture levels. One year ago, freezing conditions took many walnut growers by surprise. Most growers didn’t realize that freeze damage had occurred until some trees didn’t leaf out normally in the spring. Although affected orchards did experience re-growth that could help rejuvenate damaged canopies, the impact on production from the freeze will likely be felt in these orchards’ for years to come. 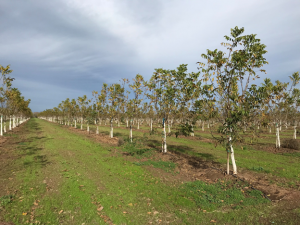 Photo 1. Young walnut orchards, like the one shown above, are particularly susceptible to early freeze events. However, both young and mature walnut orchards were damaged by a freeze event in November of 2018 (photo by Luke Milliron).

UC farm advisors found a loose relationship this past spring between orchards affected by freeze and having an early post-harvest irrigation cut off (e.g. no irrigation after mid- to late-October), or simply no postharvest irrigation at all. Soil moisture, particularly in the top foot of soil stores more heat than dry soil, and conducts the heat gained during sunny days back towards the cold tree canopy at night. Pay close attention to freeze predictions and consider irrigating two to three days before a predicted freeze. This is a key practice not only for freeze events, but also for the threat of fire. A light, irrigation two to three days before a predicted freeze is an especially critical practice, since even a dry surface crust can prevent soil moisture below that crust from conducting heat at night.