Six Steps to Prepare for the Next Sudden Autumn Freeze

With sudden autumn freeze damage occurring in three of the last four years, preparing for these freeze events needs to be a regular part of every walnut grower’s summer and fall orchard operations.

How to reduce future damage.

The best approach to escape damage from a fall freeze is to have frost alarms ready and turned on by October 15, completely rehydrate trees after harvest, and actively irrigate during frost events.

If you suspect freeze damage occurred, cut into the branches shortly after the freeze event and check the tissue for drying or browning (photo 2). Swift action in the week after a freeze event can significantly decrease damage. Sunburn after freeze can further damage tissue on the southwest side of the tree. Paint the southwest side of damaged trees with 50% diluted (1:1 water to paint) white interior latex paint. Painting up to a week after the freeze event can reduce additional damage by half or more. You can learn more about freeze recovery in our article 2020 Walnut Freeze: Road to Recovery.

When do you no longer have to worry about preparing for the next freeze? Fully dormant mature healthy trees can tolerate temperatures to the low 20’s (°F) or below. However, walnut trees must first fully acclimate to withstand severe freeze events. We believe walnuts acclimate by having the first frost events in autumn with lows near 32° F, or just below. However, we do not know how many (one, two, three, etc.) freeze events are required to acclimate trees in autumn. If the soil is dry ahead of the third, fourth, and maybe additional freeze events – it’s better to irrigate and be safe if you can do so. In addition, consider keeping up your freeze response program longer into fall or early winter for younger orchards with lots of current season’s growth. 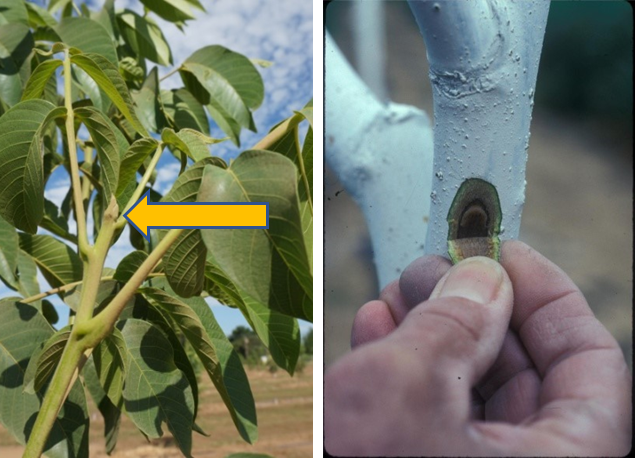 Left: Withhold irrigation until a terminal vegetative bud sets on the trunk. Right: After a severe freeze event cut into the southwest-facing trunk, looking for dark brown discoloration of the cambium (photos: Janine Hasey).

As growers were reminded this past April, autumn is not the only time that walnuts can be damaged by a freeze event. Learn more about preparing for an extreme spring frost at SacValleyOrchards.com.