Monterey and the Leafing Failure: What could be causing it?

We previously wrote about what we are seeing in 2020 with our early observations of the leafing failure problem.

Researchers have historically been unable to pin down a cause for leafing failure because it was a rare event, only being reported periodically in the last couple decades. The problem was noted periodically before 2000, but most recent reports were made by farm advisors of leafing failure symptoms in 2000, 2006, 2010, 2017, 2018, and 2020. In each of these years farm advisors and specialists attempted to link the leafing failure back to clues in that year’s weather and stress events in orchard history. One idea mentioned repeatedly by UC Davis’s almond breeder, Tom Gradziel, farm advisors and specialists in the past two decades is a combination of warm winters and a history of severe tree stress. Severe stressors that have been reported by farm advisors include severe water stress during the previous harvest, wet conditions the previous year, acute anthracnose history, defoliation from mites, and trunk bark cankers.

Symptoms have followed many, but not all warm winters. Perhaps relatedly, Professor Maciej Zwieniecki (UC Davis Plant Sciences), who leads the Carbohydrate Observatory at UC Davis, has noted that Monterey seems to have lower non-structural carbohydrates at the beginning of winter (photo 1), which may mean lower carbohydrate reserves to use during warm fall and winter conditions that increase respiration. This Monterey specific trait can potentially be linked to this variety being most likely to show the symptoms. Dr. Zwieniecki is also planning to investigate if low levels of precipitation may be a factor.

Photo 1. The UC Davis Carbohydrate Observatory data for starch (mg/g dry weight) in the wood of Monterey compared to the state average.

Bruce Lampinen, UCCE Almond and Walnut Specialist based at UC Davis has long connected wet conditions and leafing failure. In the case of leafing failure in 2020 and 2018, Lampinen points to wet conditions, in the previous spring as being a possible contributing factor. For example, in trial work in the late 1990’s and early 2000’s, Lampinen and others noted very similar leafing failure symptoms on Monterey trees (photo 2), but only in the wet treatments (averaged -9.9 bars stem water potential) and never in the dry treatments (averaged -12.4 bars). Lampinen’s thinking is that we see leafing failure most predominately in Monterey because the variety is particularly susceptible to wet feet in the spring. Monterey experiencing wet feet in spring could lead to poor root development and subsequent water stress during summer. 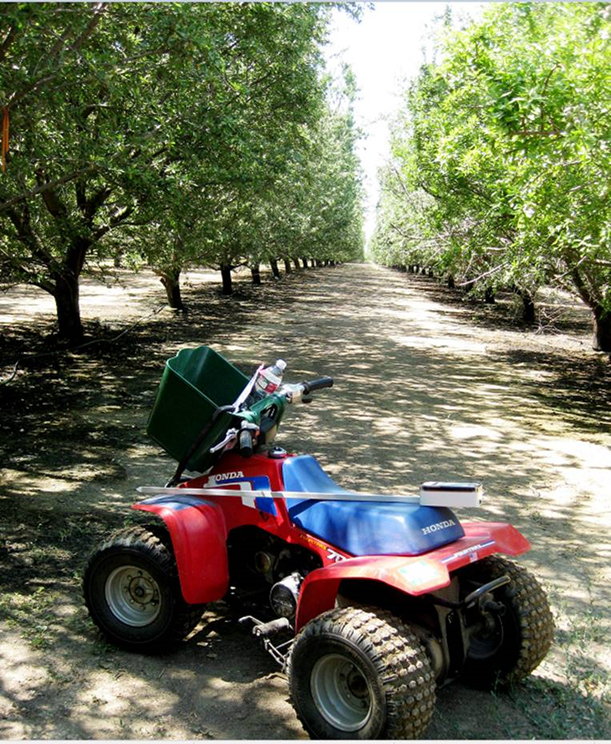 Photo 2. In trial work in the late 1990’s and early 2000’s in the southern San Joaquin Valley, Lampinen and others noted very similar leafing failure symptoms on Monterey on Nemaguard trees in 2006 (right). Only Monterey trees in the wet treatments showed the symptoms and symptoms were never seen on Monterey in the dry treatments (photo by Sam Metcalf).

Researching a cause for leafing failure:
Unlike the previous occurrences of leafing failure in Monterey and other varieties, there is now an interest among UC researchers to begin a concerted and coordinated research effort. Specifically, plant physiology and phenology research by Professor Zwieniecki, and satellite image and weather analysis by UC Davis professors Patrick H. Brown and Yufang Jin.

What can be done about it?
For orchards currently expressing leaf out problems, there is no straightforward solution, since we don’t know what is causing the problem, and the problem has been so intermittent we don’t have much experience to guide us. We do know that not all trees of susceptible varieties show symptoms both within and between orchards. This variability may indicate that some management and/or soil conditions may make trees of susceptible varieties more likely to express these symptoms.

We do not know what stressors may be contributing to the leafing failure problem. Thus, you can play it safest by avoiding severe stressors whenever possible. Adopting regular pressure chamber use  can help avoid both under- and over-irrigation. There’s a hypothesis being tested in almond, based on success in walnut that delaying the first irrigation by waiting for mild water stress with the pressure chamber could lead to trees actually being less water stressed late in the season. Keep a handle on foliar stresses like mites and anthracnose infections. Work to reduce the risk of bark damage from cankers by protecting pruning wounds and using stream-splitters to keep water off trunks. Help avoid shaker damage particularly in young orchards that are especially susceptible to barking.

If you are already seeing these leafing failure symptoms, and have reasonably ruled out other causes, know that removing affected branches now may be premature. Historically, farm advisors reported in many, but not all cases that trees recovered the next year. However, some Monterey trees with severe symptoms in 2018 did not recover in 2019, and the problem became more severe in 2020. Vegetative buds may still leaf out later this season, next season, or die but be masked over by new growth elsewhere. Flag trees that are showing symptoms and take pictures to track recovery (or lack thereof). As we try to get a handle on what’s behind this problem, we need help from growers, orchard managers and PCAs. Let your local farm advisor know if you’re seeing these leafing failure symptoms and can’t attribute it to other causes.