Potted Tree Irrigation After Planting: Getting the First Year Right

Franz Niederholzer, UCCE Farm Advisor, Colusa and Sutter/Yuba Counties
Dani Lightle, Former UCCE Farm Advisor
This is a revision of an article originally published in Almond Newsletters
and SacValleyOrchards.com in 2016

Potted nursery trees are here to stay, but they have challenges and a learning curve for growers accustomed to planting bare root trees. One of the major challenges is irrigating during the orchard’s first year. If your orchard is planted by tearing open the root ball of potted trees at planting, spreading the roots, and turning your trees into an almost bare root condition, then disregard the rest of this article!

Leafed out trees are actively growing and begin using water immediately after planting. The challenge is irrigation water must go directly into the potted soil media. After roughly 30 days, when the tree roots have grown out of the potting media into the surrounding native soil, irrigation water delivery must shift from the original potted root ball to the native soil.

Why this complete shift in irrigating potted trees after the first month in the ground? It’s because very little water will move across the large difference in textures between the potted soil media and the surrounding native soil – especially when the local soil is a fine textured soil (loam, clay loam, etc.) common to the Sacramento Valley prune growing regions (Figure 1). Water applied to the native soil after planting will be drawn to the continuous small pores of the dry native soil away from the newly planted tree, and not into the larger pores of the potting media. Water applied directly to the top of the potted soil media will move freely in the potted media but won’t drain out of the potted media until the potting material is saturated, again because the water won’t move easily between the two soils. In both situations, water does not move readily across the boundary between the native soil and the potting media due to textural differences.

Figure 1. This sequence of photos shows the movement of water applied to Tehama series silty-loam soil. Water was applied at the blue arrow, approximately 4 inches from the potting soil. Total elapsed time was 51 minutes. Water moved downwards and laterally but did not cross the boundary into the potting soil. More details HERE (photos by D. Lightle).

It takes about 30 days for tree roots to grow out of the pot and into the surrounding soil under good growing conditions. So, water the potting media for the first 30 days, then check to make sure roots have grown out into the surrounding native soil (yes, you will need to dig a hole!). If they have, move the water source, drip hose(s) or microsprinklers away from the tree. At first, put the water delivery within about a foot of the trunk, then, as the roots extend more, move the water source to its permanent location. Properly irrigating newly planted potted trees on flood irrigation (or furrow irrigation in the first year or two) is challenging unless you can individually irrigate (“tank”) trees several times during the first 30 days while the roots grow out of the potting media. 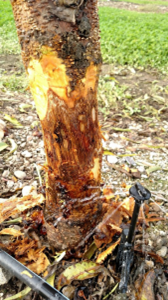 Photo. Failure to move microsprinklers away from the trunk led to trunk disease and tree death. Photo: D. Lightle.

Adequate root zone moisture is essential to good, sustained tree growth and root health – especially in the first leaf. Excessive soil water will drown the roots or invite Phytophthora infection in the crown and/or roots. Dry soil limits tree growth and eventually, survival. The extra effort to get potted tree irrigation right the first year will pay off with the best possible start for the orchard.