An autumn freeze event in November 2018 caused widespread dieback in both young and mature walnut orchards in the Sacramento and northern San Joaquin Valleys. Following reports in April 2019 of walnut orchards not leafing out and the diagnosis of freeze damage, we have followed the tree response to this damage at the end of May, and now we are following up with the same affected orchards at the end of the season in September/October 2019. These late season observations came nearly a year after the initial damaging freeze event in November 2018.

In this article photos will be labeled with an “A” for being taken in April, “M” for May, and “S” or “O” for the September/October follow up.

A tree growth response in the spring and summer of 2019 was enabled by adventitious buds. Adventitious buds are held in reserve on tree limbs and trunks and allow for regrowth following dieback from cold injury, as well as other damaging extremes such as fire and flood. These latent buds normally are dormant yet can “wake up” and sprout when needed from many plant parts (trunks, limbs, or roots). Sometimes adventitious buds are slow to break, we saw an example of this in 2017 following spring flooding of the Feather River, when adventitious buds broke in June and continued to break and produce new shoots through the summer. In contrast, in 2019 following November 2018 freeze damage, these dormant buds were breaking in April and continued in May (photo 1), and later in the season.

Photo 1. On otherwise blank branches, some adventitious buds were beginning to push on this Howard tree on April 19 (A, by Janine Hasey). These adventitious buds appeared to continue to break later into spring (M, photo May 31st, by Luke Milliron).

Generally, in both May and the September/October follow-up, vigorous regrowth from adventitious buds appeared to produce healthy canopies (photos 2, 3). However, substantial dead wood remained in some affected orchards at the end of the season (photo 2). In other affected orchards, some growers aggressively removed dead wood (photo 3). We advised that young trees that were frost damaged should be painted with a 50:50 white latex paint to protect from sunburn damage. We also advised growers to wait to cut out dead wood, in order to give a chance for adventitious buds to push. Once new growth had pushed, a key reason to remove this dead wood is that it is highly susceptible to colonization by Botryosphaeria (photo 4). At the end of the season, one Butte County producer who carefully tracks yields in their orchards documented yield reductions between 13% and 46% in freeze affected bearing orchards. Even in orchards with vigorous, healthy regrowth we would expect reduced yields to continue in the next few seasons as canopies re-establish and a new population of fruiting buds is established.

Photo 2. Very little leaf out in this part of a Gridley, CA Chandler orchard on April 22nd (A). Significant canopy development in the same orchard by May 30th (M) and finally on October 16 (O). (photos: Luke Milliron). 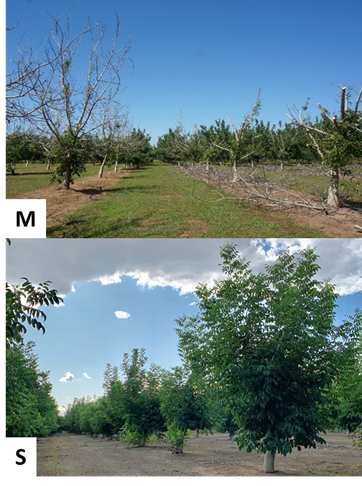 Photo 3. Selective chainsaw cuts made to a 7th leaf Chandler orchard in Yuba County on May 31st. Photo (M) shows an unpruned row on the left and a pruned row on the right. Photo (S) shows the substantial and healthy-looking regrowth as of September 30, 2019. (photos: Janine Hasey). 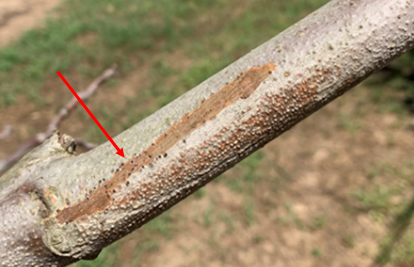 Healthy regrowth characterized the tree freeze response in most, but not all freeze affected orchards. Several trees in two bordering freeze affected Chandler on Paradox Seedling orchards north of Chico showed healthy regrowth at the end of May but yellowing leaves and collapsing canopies at the end of the season (photos 5, 6). In October, no bleeding was seen at the base of the trunks with declining canopies. Although we didn’t cut into trunks to look for a canker, we suspect these trees were not declining from a pathogen like Phytophthora. Instead we believe the most likely cause was root damage from water logging. These affected trees had much smaller canopies than surrounding trees, and therefore much lower water use. With heavy rains in late May, and a subsequent season of irrigation designed to meet the water use requirements of the healthy trees, these trees were at high risk of water logging. The grower was still happy with the regrowth seen in most of the affected trees in both orchards and was optimistic for the future. Going forward, colonization of dead wood by Botryosphaeria and the lower water use of freeze affected trees are just two of this issues that growers will have to manage as these orchards recover.

Photo 5. Two trees with very little leaf out at the edge of a Chandler orchard northwest of Chico, CA on April 22nd (A). Significant canopy development (M) of the same two trees on May 31st. However, many of these freeze affected edge trees showed yellowing leaves/collapsing canopies on October 11th (O).  (Photos: Luke Milliron).

Photo 6. Clusters of severely affected trees that did not leaf out on April 22nd (photo 5). Substantial canopy growth from the lower/central portion (photo 6) of most of the affected trees in this orchard on May 31st. However, like the adjacent mature block (photo 3), many of the freeze affected trees in this younger Chandler block showed yellowing leaves/collapsing canopies on October 11th (O).  (Photos: Luke Milliron).

Another challenge for walnut growers with young freeze damaged orchards is re-training. Janine Hasey visited a 3 year old walnut orchard in Placer County trained in the “no prune/no heading” system, that had severe freeze damage and good limb regrowth (photo 7). This grower thought because they had done no pruning that they had to continue not to prune, but that is not the case with freeze damage. These trees need to be retrained with proper selection of primaries. Doing selective thinning cuts (see close-up) will be very important in these cases. 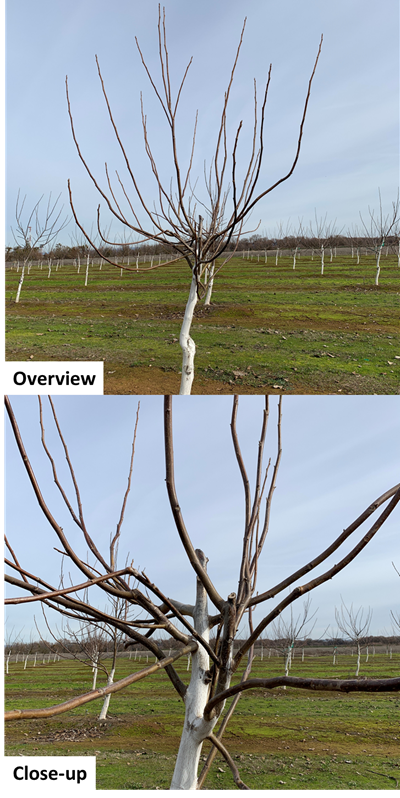